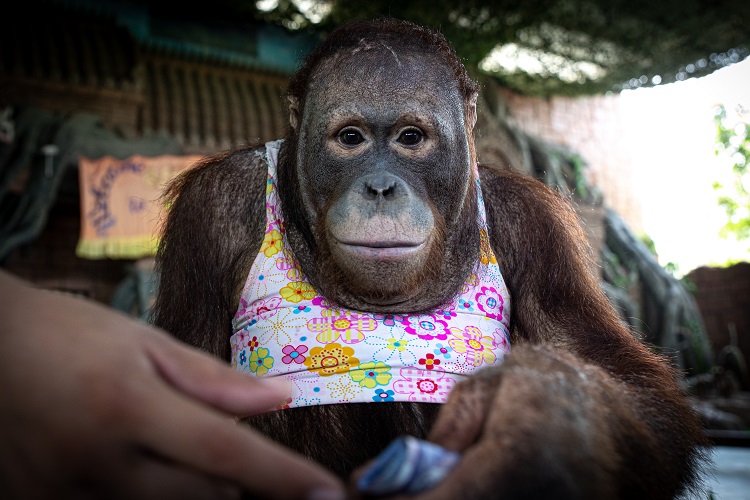 Several elephants were used to give rides to visitors. They had large, metal ‘howdah’ seats tied to their backs, so that they could carry two people plus their handler. The handler carried an ankus (stick with a metal hook on the end) which he used to control the elephants. When not being used for rides, the elephants were held in concrete-floored areas, tethered to metal railings by short ropes.

Crocodile ‘wrestling’ shows were put on in which the animals were manhandled and climbed upon by the handlers. They were kicked, hit and had their mouths pulled wide open and their tails yanked in front of an audience of just a few people. The crocodiles appeared to have various small sores on their bodies and possibly fungal infections. Young  crocodiles were being used for visitor handling and as ‘props’ for souvenir photographs. Their mouths had been taped tightly shut in an attempt to make them safer to handle.

There was a designated area at the zoo where other exploitative animal shows took place. Orangutans dressed in clothes have been trained to perform humanised behaviours, such as boxing, riding bicycles and hula-hooping. One orangutan was made to stand on a podium and comically pull his trousers down. They were also made to pose for photos with the paying public, as was a macaque monkey, dressed in a children’s’ clothes with a metal collar around its neck and attached to rope lead.

There were also circus-style shows using seven tigers. They had been trained to jump through burning hoops of fire, balance on podiums and stand up on their hind legs on command. The tigers often appeared to be quite agitated, letting out various growls and snarls.

Born Free continues to raise awareness of animal exploitation in zoos and encourages tourists not to support it.

We are calling on the Cambodian authorities and zoo industry associations to take action to address the conditions and treatment of animals at Phnom Penh Safari Zoo.