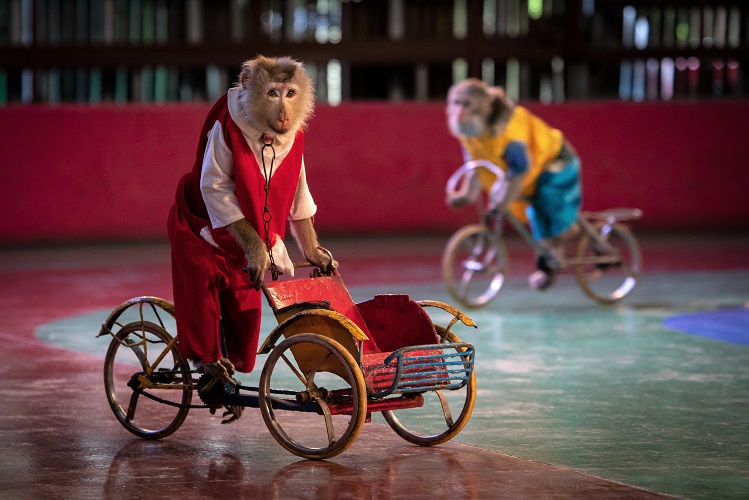 Many of the animal enclosures seen were small, dark and barren. Of particular concern was a large, male orangutan, whose concrete cage was about 4x5m in size with a glass viewing window. The cage was completely empty, apart from just two large rocks that he was slumped behind. He later moved to the front of cage, where he sat with his head against the glass window, staring. Visitors reached over and banged on the glass to try and get a reaction.

There was an elephant tethered by one of her front legs with a very short chain in a fenced off concrete area. She was barely able to move and appeared quite thin with some of her bones visible under the skin.

The water in the crocodile’s enclosure appeared filthy, filled with scummy water with a seemingly discarded plastic water bottle and other bits of littler floating around.

The park puts on shows in which animals are trained to perform demeaning tricks. Macaque monkeys were dressed up in clothes and had been trained to perform circus-style tricks, such as ride bicycles, lift weights, walk on stilts, and do a handstand on the back of a goat. All monkeys had metal chains around their necks.

NB Prior to our visit to Dam Sen, there were reports that the Vietnamese authorities were investigating allegations of cruelty at this zoo, particularly regarding the use of animals in the circus-style shows and also concerns as to the origin of some of the animals. However, following a reported statement that the animal shows would stop, they were clearly still taking place during our visit.

Born Free continues to raise awareness of poor conditions in zoos. We are calling on the Vietnamese authorities to take action to improve the conditions and treatment of animals at Dam Sen Park.