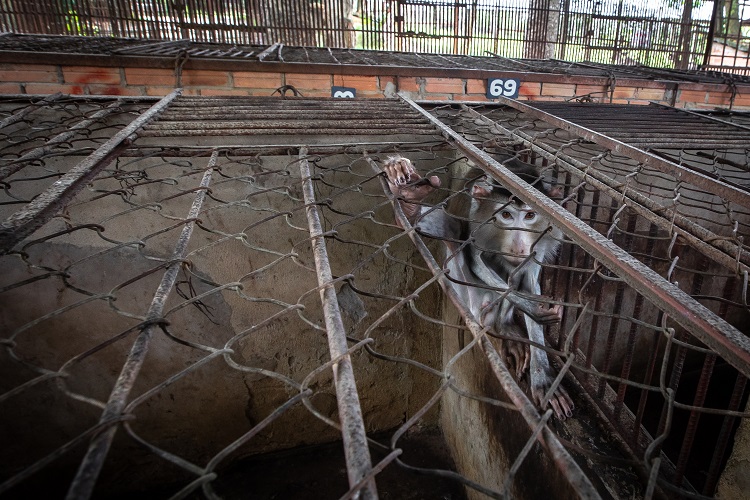 During his visit, our investigator was followed around by security and the zoo owner, who were not happy about the animals being photographed. The conditions that most of the animals were being kept in were extremely poor.

The moon bear enclosure, though bigger than many of the other animal cages at the zoo, was quite bare with no apparent enrichment or climbing opportunities. The moat surrounding the enclosure was filled with dark, green water.

The white stork cage was very small and it held at least seven storks. The cage was dark, dirty and had a concrete floor and small trough containing green water. The storks’ feathers also appeared to be quite dirty and in poor condition.

The crocodile enclosure contained litter, such as plastic bottles, and was filled with dirty, green, stagnant water. The smell was horrific. A goshawk was held in a small cage. It appeared to be blind in one eye, which was completely clouded.

There were rows of disgusting tiny, concrete cages with wire mesh tops, containing around a dozen animals, including porcupines and macaques. The living conditions for these animals were horrendous and many of the macaques appeared to be very thin.

Major concerns were noted regarding the physical condition of many of the animals, particularly the hoofed mammals. Kudo antelopes, eland antelopes and horses appeared emaciated with their ribs and spines clearly visible.

Born Free continues to raise awareness of poor conditions in zoos. We are calling on the Vietnamese authorities to take action to improve the conditions and treatment of animals at Cu Chi Water Park.