Born Free visited Bitola Zoo to investigate ongoing reports of animals kept in sub-standard conditions and concerns for their welfare. 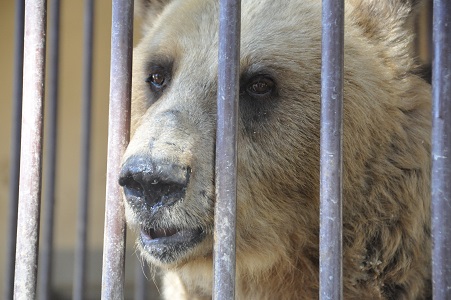 Whilst some attempts appeared to have been made by the zoo to make improvements to a few of the enclosures, the living conditions for many of the animals was found to be extremely poor. Of particular concern were the wolf and brown bear enclosures, which consisted largely of concrete and iron bars. One bear was kept in a concrete pit surrounded by a moat of green, stagnant water. Some enclosures were dirty or covered in litter.

Some animals appeared to be in poor physical condition, such as a macaque with extensive bald patches and a brown bear with an apparent eye infection and with signs of diarrhoea in its enclosure. An owl was housed in a very small and dirty enclosure, right next to a playground and picnic area.

Visitors could easily reach into cages and touch or torment the animals. Visitors were observed putting inappropriate food items into the baboon cage. No keepers were observed during our visit.

In general, the zoo failed to meet even basic standards of animal welfare, hygiene and public safety.

Born Free has met with the Minister Plenipotentiary at the Macedonia Embassy to report our concerns, and has called for urgent improvements.

We also have offered our help to rehome the animals. But this offer has yet to be accepted.