Distinctive due to their reddish hair and long arms, the name ‘orangutan’ directly translates from Malay to ‘person of the forest’. As the largest tree-living mammal, orangutans spend over 90% of their lives high up in the forest canopy.

Wild orangutans are under threat from habitat loss due to logging, palm oil production, mining, and agricultural expansion. Deforestation is by far the most serious threat to orangutans and, over the last three decades, an estimated 80% of orangutan habitat has been lost.

Other threats to orangutans include illegal hunting for meat, and capture for the exotic pet trade. 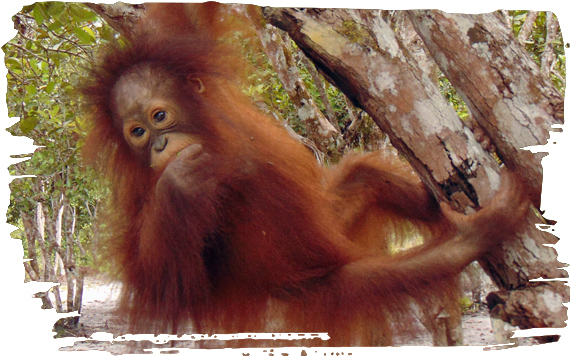 WHAT’S INCLUDED IN YOUR ORANGUTAN ADOPTION

Help protect orangutans in the wild and rescue individuals with an animal adoption, and you'll receive an exclusive adoption pack containing a soft toy, animal story, species fact sheet, personalised certificate and glossy photo. Plus, we’ll send you our Adopt! magazine twice a year with updates on all our wildlife adoptions – perfect for animal lovers.

Adoptions last one year (those paid by monthly direct debit roll over until cancelled).

WHY ACTION IS NEEDED TO HELP SAVE ORANGUTANS TODAY

There are three different species of orangutan, and all are balancing on the brink of extinction: classed as Critically Endangered on the IUCN’s Red List.

The Tapanuli orangutan, known to us since 2017, represents an unprecedented modern day discovery. However, these individuals now face a serious threat to their long-term survival thanks to a devastating reduction in forest habitat (for example 60% between 1985 and 2007 alone), and the proposed construction of a hydroelectric dam which will flood large forest tracts. Found in only three isolated pockets within the Batang Toru Ecosystem, in northern Sumatra, Tapanuli orangutan numbers would be unsustainable if the project goes ahead.

All three species of orangutan face the prospect of uncertain futures from human activity, causing fragmented and degraded habitats, and animal suffering due to exploitation. However, with your support, there are projects that are having a direct impact. The Orangutan Foundation supports all species by focusing on conserving their habitats, and rescuing individual animals for release back into the place they rightfully belong.

ADOPTING AN ORANGUTAN WILL HAVE A MASSIVE IMPACT

Funds from your adoption will support the Orangutan Foundation’s vital conservation work to protect the Central Kalimantan province and sanctuary, and to safeguard the future of the precious orangutans who live there. Your adoption will also support our campaign against the illegal trade in bushmeat, from apes and other threatened species, and our campaign in opposition of the live trade in apes. You can help protect wild orangutans by adopting Timtom below.

Your money will go directly to supporting little Timtom, who now lives the life she deserves thanks to the efforts of this organisation. The Orangutan Foundation focuses exclusively on orangutan protection and conservation. With our assistance, alongside other partners, hundreds of rescued orphans have been released into a protected reserve, and millions of acres of habitat have been conserved.

Every one of these cousins of ours, these people of the forest, is one of us. They are in great danger. All that can be done to save them must be done. Look into Timtom’s eyes. She needs you. So let’s do all we can. We owe her that. It’s we who have caused her and all orangutans so much harm. Let’s right our wrongs.Sir Michael Morpurgo OBE

Continue to conserve hundreds of thousands of acres of habitat

Rescue orangutans and release them back into the wild

Promote research and education on the plight of the orangutan.

Timtom was just a baby when she was taken from her mother and illegally kept as a pet.

Rescued by the Orangutan Foundation, she now lives at Camp JL in Borneo, part of the their soft-release programme.

She will be looked after until she is ready to return to the wild, your adoption will help conserve wild orangutan populations.

ADOPTING AN ORANGUTAN AS A GIFT?

NEED HELP WITH YOUR ORANGUTAN ADOPTION?