Rhinoceros belong to the group known as the perissodactyls, or odd-toed ungulates, which includes horses and tapirs. Characterised by their large size – all species can weigh more than a tonne – rhinos have one or two horns, a thick skin made of collagen arranged in a lattice structure and a relatively small brain.

Most rhino species lead largely solitary lives although home ranges sometimes overlap, with shared feeding grounds, water holes and wallows. The closest relationship is between a female and her calf, lasting from two to four years; as calves mature they leave their mothers and may join other females and their young temporarily, before living completely on their own. Males are territorial to varying extents, often marking their territory with middens of dung.

Rhinos, especially black rhinos, can appear rather ill-tempered – particularly in areas where they are hunted or regularly disturbed – and have poor eyesight, which might explain why they sometimes charge without apparent reason. They have an extended vocabulary of growls, grunts, squeaks, snorts and bellows.

Wild rhinos have a lifespan of 30-50 years. Pregnancy lasts 15-16 months and the 63kg newborn calf relies on its mother’s milk for up to two years.

The continuing threats from illegal hunting for sport and poaching for their horns, for use in traditional Asian medicine, mean that rhino numbers have fallen dramatically from historical levels.

Rhino habitats are encroached on by human population growth and associated agricultural development and domestic livestock – they are sensitive breeders and when land is severely fragmented populations become smaller and more isolated which limits breeding. 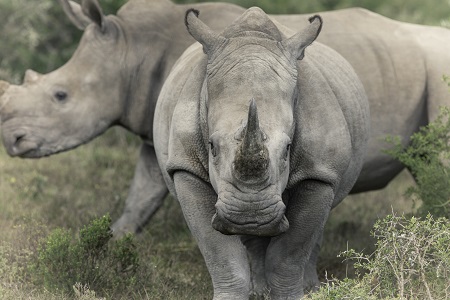 We investigate the transit routes that wildlife crime operatives use to move rhino horn from source country to illegal market.

We lobby the South African and Swaziland governments to suspend all exports of rhino trophies and live animals and desist from any attempt to create a legal trade in rhino horn.