With streamlined bodies and powerful tails, bottlenose dolphins can swim up to 300 metres below the surface of the ocean – remaining submerged for up to 20 minutes – and are capable of bursts of speed of around 30mph.

Dolphins have sharp eyesight but use echolocation to explore and search out prey when visibility is limited. They are extremely intelligent animals and communicate through pulsed sounds, whistles, clicks and body language.

Bottlenose dolphins usually live in pods of around 10-30 members, although super-pods, larger than 1,000, have been recorded. Adult males live mostly alone or in groups of two to three and join pods for short periods of time.

After a gestation of 12 months, females give birth in shallow water – the calf suckles for around 18 months but will stay close to its mother for several years.

Although not necessarily facing extinction in the immediate future, specific populations of bottlenose dolphins are threatened due to human impact including illegal hunting, a shortage of food due to over-fishing, drowning in fishing nets and marine pollution.

Bottlenose dolphins also suffer in captivity, where they are exploited for human entertainment.

Dolphins are brutally slaughtered in Japanese drive hunts; fishermen surround a pod with nets which pull them into a confined area. Some dolphins have their throats slit or are stabbed, whilst others are caught on hooks and winched out of the water to be slaughtered. Some die of shock, become tangled in nets and suffocate or may crash into boats, harbour walls or each other. It is estimated that 16,000-20,000 dolphins per year are killed during these hunts, which also supply live dolphins to zoos and aquaria around the world.

Efforts are needed to protect wild bottlenose dolphin communities from human impact; we campaign against Japanese drive hunts and wild capture of dolphins, and seek to end suffering in captivity. 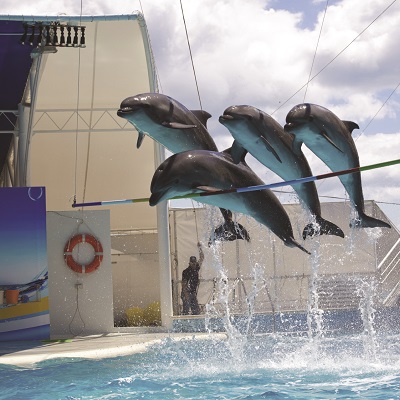 We campaign against confinement of bottlenose dolphins, and other cetaceans, in captivity. We work to expose and investigate inadequate captive facilities, leading to tighter regulations and improved animal welfare.