The giraffe is the tallest land animal in the world – a male giraffe stands up to 5.5m high and weighs nearly two tonnes. Despite its long neck, the giraffe only has seven neck vertebrae – the same number as humans and nearly all other mammals – the bones are simply extremely elongated.

Giraffes are strong and fast. A well-placed kick could shatter the skull of a predatory lion, while a running giraffe can reach speeds in excess of 55km per hour.

Nine sub-species of giraffe exist in Africa, each with distinctive patchwork markings believed to have evolved as a camouflage to help giraffes blend in with the dappled lighting underneath the trees in their wooded savannah habitat.

Giraffes have a 25-year lifespan and live in unstable herds that might consist of males and females of any age, whilst older males live in bachelor herds. Long-term associations do exist, seemingly depending on factors like family relationships, sex, age, etc.

After a 15-month gestation, the female will give birth to a single calf, measuring 1.8m at birth and growing 2cm a day until maturity.

Habitat loss and fragmentation due to human population growth are the main threats to giraffes in the wild, although civil conflict, hunting for their meat, pelt, and tails, and environmental conditions like severe drought can also pose risks.

Giraffes are also exploited in zoos and circuses. Wild giraffes are specialised herbivores, living complex lives and roaming over large expanses, so being confined to small enclosures can lead to extreme frustration and boredom. Captive giraffes often exhibit abnormal behaviours, such as repeatedly twisting their necks or licking the bars of their cage. 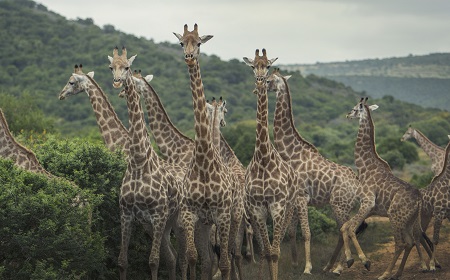 Born Free is working collaboratively with our partners to provide a focused programme, at grassroots level, to ensure the conservation and survival of reticulated giraffes in the Meru Conservation Area, Kenya.