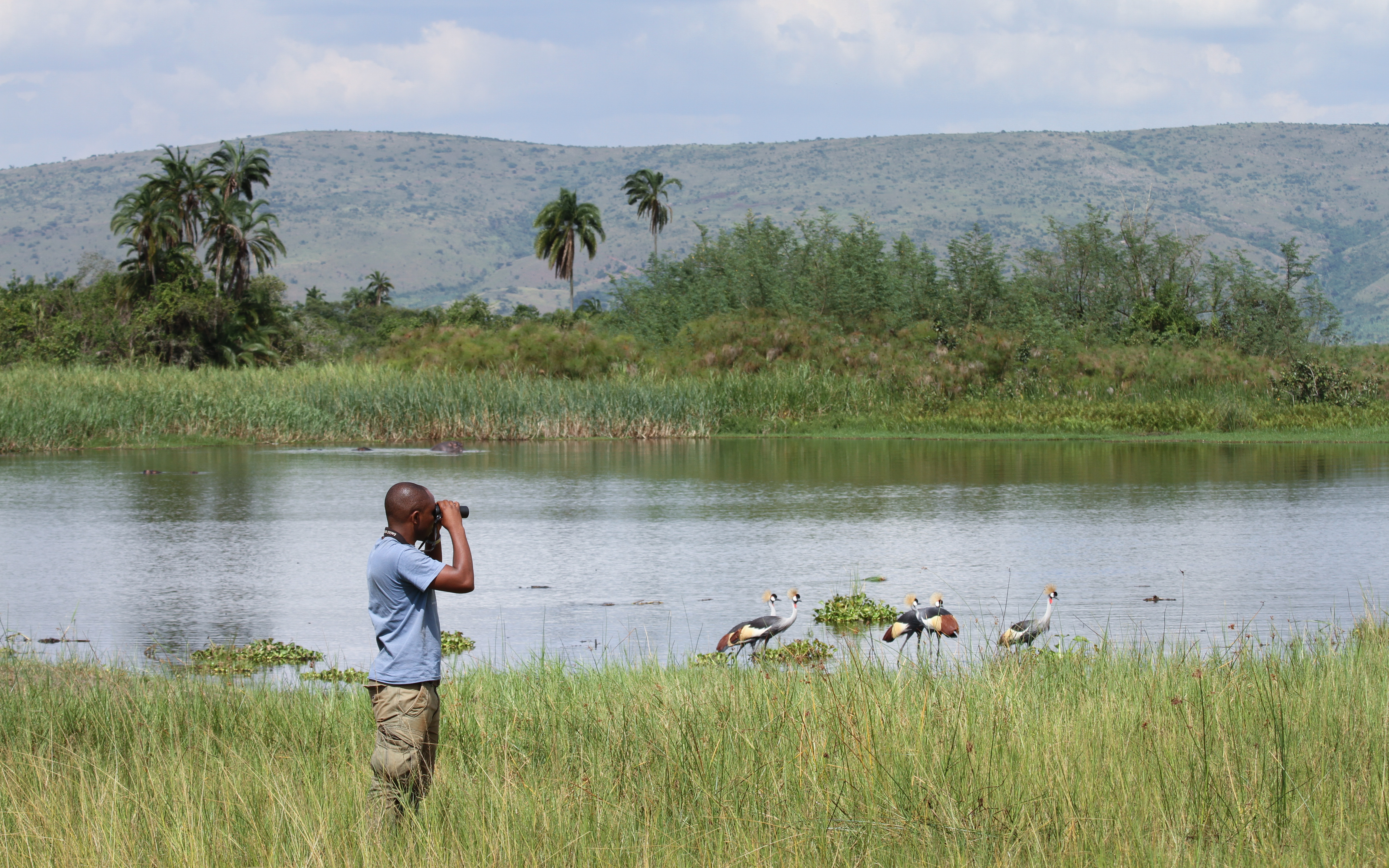 Despite tough times, Born Free is delighted to announce not one but two recipients of grants as part of the coveted McKenna-Travers Award for Compassionate Conservation 2020.

Dr Olivier Nsengimana, Founder & Executive Director of the Rwanda Wildlife Conservation Association (RWCA), has been declared the overall winner (£10,000). As a result, one of Africa’s most emblematic but threatened bird species will benefit.

Dr Jenny Desmond, Founder and Director of the Liberia Chimpanzee Rescue and Protection (LCRP), along with her husband Jimmy, have been awarded the second prize (£5,000) recognising and rewarding their work, rescuing, and rehabilitating orphan chimpanzees.

The £15,000 prize fund provides support and recognition for outstanding individual conservationists and carers who place a high priority on individual animal welfare, while carrying out their conservation work, supported by environmental education and conservation policy. It is named in honour of Virginia McKenna OBE, her late husband Bill Travers MBE, and their eldest son, Will Travers OBE, who co-founded the charity that became Born Free in 1984.

RWCA is a Rwandan non-profit organisation dedicated to providing sustainable solutions to critical wildlife conservation issues in Rwanda and the East African region using a holistic and multi-disciplinary ‘One Health Approach’. Its key area of work is to combat the illegal trade in grey crowned cranes. Grey crowned cranes are listed as Endangered by the IUCN Red List, with their numbers and habitat declining through most of their range.

Just five years ago, Dr Nsengimana – a passionate, dedicated, young veterinarian, and Rwandan national – identified that grey crowned cranes were suffering in captivity throughout Rwanda, from hotels to private houses. These birds were often stressed, malnourished, had their wings broken to prevent them from flying, and died prematurely. Meanwhile, estimates suggested just 300 cranes were left in the wild in Rwanda, threatened by habitat loss and poaching for the illegal trade.

Led by his determination to make a difference for his country, having witnessed the horrors of the 1994 genocide as a nine-year-old boy, Nsengimana set out to stop individual animal suffering and save and protect his country’s grey crowned cranes.

Since then, RWCA has ended the captive exploitation of crowned cranes, registered 381 individuals and reintroduced 167 to the wild. It has established a permanent facility for disabled or injured cranes, meaning that, except for the RWCA, there are no captive cranes left in Rwanda. Some 31 rangers and 30 ‘Conservation Champions’ have also been trained, engaging over 840 local leaders and security personnel. In addition, more than 20,866 school children have been reached through workshops, a comic book, environmental clubs and a tree-planting scheme. As a result, grey crowned cranes in Rwanda have increased from 487 in 2017 to 748 in 2019. A recently concluded 2020 crane census sighted 881 cranes. 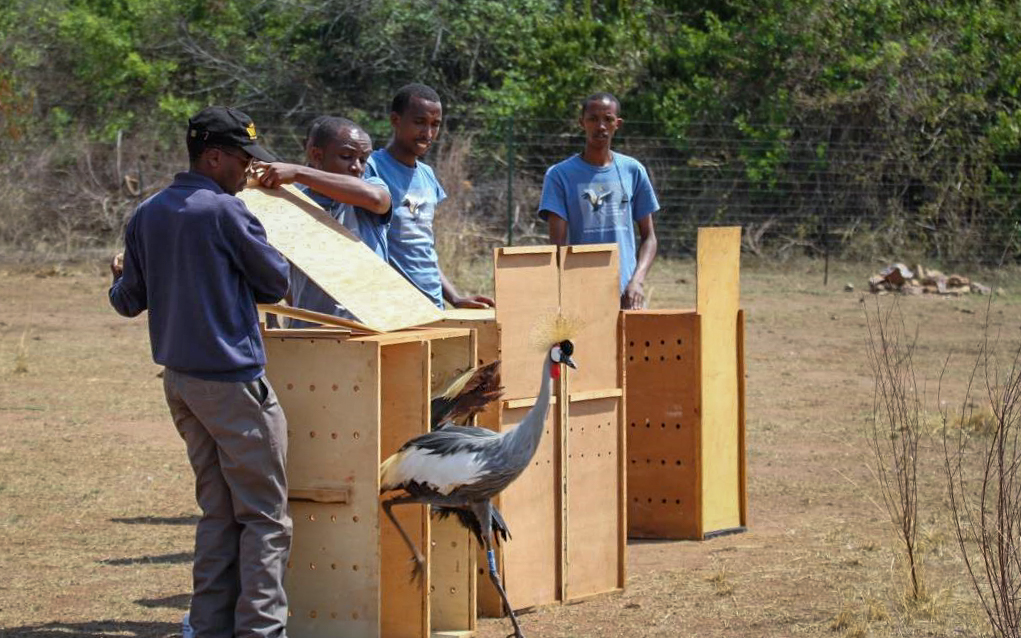 Olivier will use the grant to scale up RWCA’s cross-boundary collaboration between Rwanda, Uganda, and Tanzania. This will include recruiting and training Community Conservation Champions to protect the cranes, introducing the use of a CyberTracker app to record sightings, and developing conservation agreements with farmers to promote co-existence between wildlife and people.

A second grant of £5,000 was also awarded to Jenny Desmond, Founder & Director of Liberia Chimpanzee Rescue & Protection for her work rescuing and rehabilitating orphan chimpanzees, tackling the illegal live trade in chimpanzees and working to enhance wildlife law-enforcement across the country. The grant will support the development of an intensive care unit for orphan chimpanzees.

Virginia McKenna OBE, Born Free’s Co-Founder & Trustee, said: "It is always humbling and inspiring to read the individual stories we receive from people, all over the world, who apply for this award. This year is no different. But Dr Nsengimana’s determination to highlight and end the plight of Rwanda’s grey crowned cranes – illegally traded, often kept in totally unacceptable captive conditions, in poor health – with numbers reduced to about 300 in the wild – was totally inspirational to say the least. There are now no more cranes in captivity, and he is no longer a lone voice, so I am extremely happy that this very special work has won the award, as I am that a 'runners up' recognition has been given to the extraordinary and selfless efforts of Jenny Desmond and her husband, Jimmy, and their team, who devote their lives to the rescue and care of chimpanzees in their sanctuary in Liberia."

Will Travers OBE, Born Free’s Executive President & Co-Founder, added: “Through this award, we have been exposed to some incredible people and compassionate conservation projects from all round the world. In my view, every one of them is a winner, and I hope that they will forge strong links with Born Free as we try to protect and conserve wildlife, always respecting the vital importance of the individual.”

On winning the award, Dr Nsengimana said: “I am so honoured to receive this recognition and it comes at an important time when the world is struggling with the current pandemic and conservationists are going through a test. The threats to wildlife are increasing and the resources put towards saving them are decreasing as all systems are struggling, so this award is a huge boost to our moral. It’s like fuel to give us strength and empowers us to continue. It’s good to know people are still out there watching and are ready to continue their support to protect species throughout the world.”

Professor Claudio Sillero, Chair of the Award Committee, added: “I have been fortunate to meet Olivier and learn about his ambitious work. Olivier’s passion and optimism are contagious, essential traits when taking up such a huge challenge. With Olivier and his team cranes are rescued from hideous conditions, given a chance to spread their wings and fly back to the wild.”

A call for the McKenna-Travers Award for Compassionate Conservation 2021 will be announced in the New Year.