Born Free strongly advises people not to participate in swim-with or close contact activities with captive dolphins and other cetaceans.

Many captive facilities offer visitors the opportunity to interact with dolphins by touching, feeding, riding and swimming with them. Many operate swim-with programmes, where visitors can interact with dolphins in the pool, while the animals perform various trained activities, such as dorsal fin pulls, foot pushes, clapping and kissing. Dolphins may also be used as props for souvenir photographs – often involving the animals having to beach themselves out of the water.

Dolphins used in swim-withs are usually held in small pools, often without refuge opportunities away from public view. Captive bottlenose dolphins have been known to show signs of distress and alarm during these interactions. Dolphins have delicate skin and are at risk of harm from human fingernails and jewellery. Not all facilities require participants to remove their make-up and sun tan lotion before entering the pool, which may contaminate water and irritate the dolphins’ skin and eyes.

Sea pens close to shore may appear more natural, but they often contain only very shallow water. The water can get very hot in the sun and the dolphins are prevented from diving more than a metre or two under the surface. Tidal flow is often insufficient to clean sea pens and dolphins may live in stagnant, contaminated water.

Swim-withs are associated with many concerns, including the potential for injury to both humans and dolphins. There are numerous accounts of swimmers receiving bites, bruises, scratches, abrasions and even broken bones. Dolphins are also known to harbour numerous bacterial and fungal diseases that can be harmful to people, including streptococci, staphylococci, pseudomonas, mycobacteria and lobomycosis. 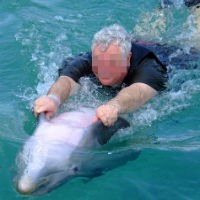 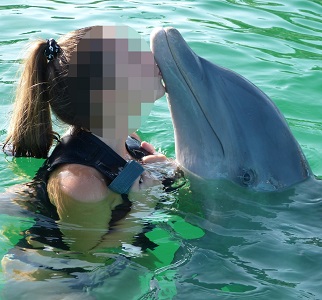