Hippos are amphibious, spending their days in water – rivers, lakes, wetlands and muddy wallows – and emerging at sunset to feed.

A hippo’s skin must remain moist, as it will crack if exposed to the air and sun for long periods. They secrete an oily red liquid from subdermal glands which is thought to function as a sunscreen, antibiotic and insect repellent.

Fights for possession of a territory can be fierce and hippos may inflict considerable injuries with their huge canines, though minor conflicts are often settled by threat displays such as the yawn.

Hippos are sociable and live in herds ranging from the tens to 100. Females usually give birth to a single baby every other year and lactation can extend for 18 months or longer.

The primary threats to hippo survival are poaching, for their ivory canine teeth and meat, and loss of habitat due to human settlement, deforestation and pollution.

A reliance on freshwater habitats puts hippos in direct conflict with increasing human populations, primarily due to water diversion for agricultural and building development in proximity to wetland areas.

The ivory trade is a major threat to wild hippo populations. Born Free campaigns to ensure the hippo’s survival in the wild. 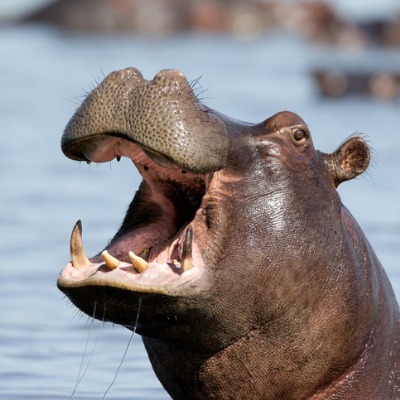 The primary threats to hippo survival is poaching for their ivory canine teeth. As a result of elephant ivory bans we could see poachers target hippos as an alternative source of ivory.