Born Free strongly advises people not to ride elephants or participate in other close contact activities with elephants.

Elephant interaction activities include riding, feeding, bathing, walk-withs and souvenir photographs. These activities are often very popular with tourists. However, there are a great many animal welfare and public health and safety concerns involved with close contact between people and elephants.

Elephant-back rides and other close contact activities are common throughout southern Asia and, more recently, in parts of Africa. Elephants used for trekking may be overworked and subject to strict training and management, often leading to physical and mental damage. They are especially prone to injuries related to carrying people on their backs – in particular, spinal damage and sores or cuts caused by ropes and the howdah (the wooden or metal seating often used to carry riders). Trekking elephants may also suffer from prolonged exposure to direct sunlight, have limited access to drinking water, and may develop foot problems from repeated walking on hard and hot surfaces while carrying heavy loads.

Elephants may also be forced to lie in rivers for hours at a time or stand chained, while paying tourists bathe or feed them and pose for photographs.

In order to tame elephants for close human contact, they may routinely undergo abusive training regimes. In Asia, systematic brutality, known in some areas as phajaan, is commonly used on young elephants in an attempt to make them more tractable and compliant with human contact. This process usually involves the separation of young elephants from their mothers – a process which in itself is extremely stressful. A series of horrific acts are then inflicted upon the terrified animal, such as binding with ropes or chains; confinement in a small crush cage; beatings; and food and water deprivation. This nightmare can go on for many days until their spirit is broken and resistance is weak. Some elephants may not survive the ordeal.

Most traditional elephant training techniques involve the use of the ankus or bullhook (a sturdy stick with metal spikes and hook on the end), which is jabbed in sensitive areas, such as the back of the elephants’ legs or behind the ears, causing significant discomfort and pain. The ankus is normally used from the earliest stages of training and throughout the animal’s lifetime to gain obedience. The mahout or handler often only has to wield it to be obeyed and tourists do not always witness any abusive behaviour, unaware of the suffering elephants have gone through for years to learn a cue to behave or follow a command.

Captive elephants are often chained for extensive periods of time. Some male elephants, in particular, are often highly aggressive and difficult to control during a period of hormonal change known as musth, and may be chained by their legs for several months. They may even be denied food to shorten the period of musth. Chaining can be both physically and psychologically damaging to elephants. The restriction of movement for many hours can lead to obesity and health problems, and also abnormal behaviour, such as repetitive stereotypic head bobbing and swaying.

The dangers of close contact with elephants should never be underestimated. Whether born in the wild or in captivity, all elephants are wild animals and their ability to cause harm is very real. There have been numerous incidents of human death and injury involving elephants kept in camps, zoos or used in trekking activities. 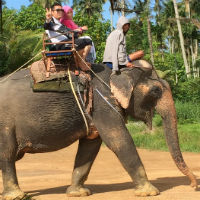 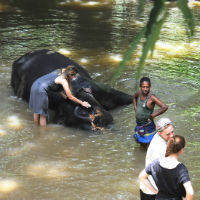 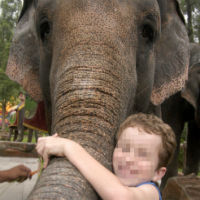 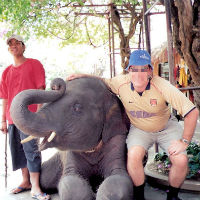