Chimpanzees share about 99% of our DNA, making them the closest living relative of humans. Some even argue that they should be taxonomically categorised as Homo, the same genus as humans.

Chimpanzees are highly intelligent, with complex social structures and distinct cultures. They are also known to make and use tools, including stick tools for the extraction of ants, termites, honey and bees; stone and wood tools to crack nuts; fishing rods created from long branches to fish for algae; and sponges made from leaves. Sick chimps have also been known to eat potentially medicinal plants. Before Jane Goodall’s pioneering studies revealing tool use in chimpanzees, humans believed that toolmaking and use was what made us distinct from other animal species. Now we know that chimps, some birds, and even some fish can make and use tools.

Chimpanzees are social, living in communities of up to 150 individuals. Chimps live in a fission-fusion society, meaning they don’t stay together all the time, but form temporary associations with a subset of the group. Social hierarchies exist for both male and female chimpanzees. Males will assert their dominance through displays of aggression and have been known to attack, and even kill, trespassers in their territories.

Chimps have a wide repertoire of complex expressions, postures, and vocalisations for communication. Chimps are quite vocal and use a variety of grunts, squeaks, screams and barks to express different emotions. Tactile communication, such as social grooming, is also vital to reconcile conflicts, ease stress, and develop and maintain bonds between individual chimps.

Female chimpanzees usually give birth to one infant, or occasionally twins. Infants are completely dependent on their mothers and travel with her on her back or stomach. Young chimps will become independent at about six to nine years old, although they will maintain lifelong bonds with their mothers.

Wild chimpanzees face a very high risk of extinction in the near future due to threats such as hunting, habitat loss and degradation due to industrial logging and agricultural expansion, and disease.

Chimpanzees are hunted for bushmeat. When adult females are killed, their infants may be taken and trafficked for the exotic pet trade, effectively removing two generations at once.

Outbreaks of rapidly spreading infectious diseases, such as the Ebola virus and anthrax, have also led to declines in chimpanzee populations. Although vaccinating wild chimpanzees is a possibility, such a project would be extremely difficult and infectious disease is likely to remain an issue into the future. 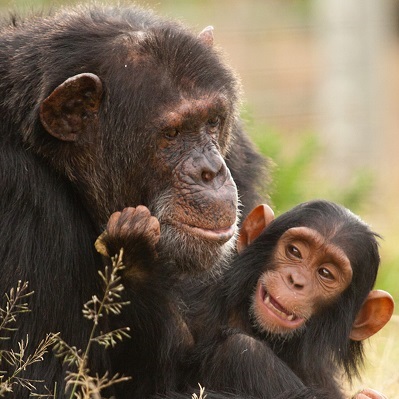 Born Free supports the rescue, care and release of chimps through the Ngamba Island Chimpanzee Sanctuary in Uganda and the Limbe Wildlife Centre in Cameroon. 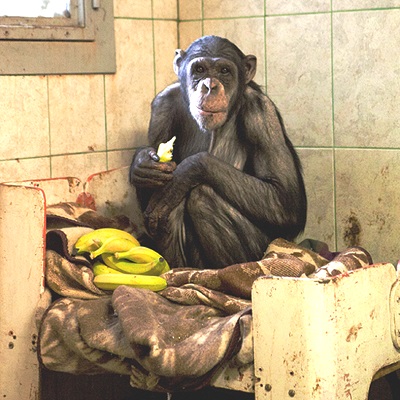 We campaign against the illegal trade in bushmeat from great apes and other threatened species, oppose the live trade in infant apes, and the keeping and exploitation of chimps in captivity around the world. 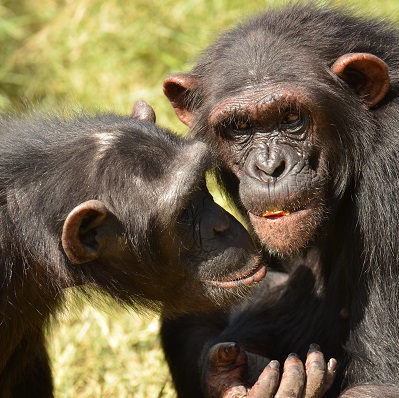 We help support significant populations of threatened primates and ensure their long-term protection.