UK zoos vary in scale and scope, and a diverse range of premises including bird of prey centres, aviaries, farm parks with exotic animals, safari parks, traditional metropolitan zoos and aquariums are issued licences to operate as zoos by their local authorities. More than 50% of local authorities have one or more licensed zoos within their constituency.

Born Free maintains the most complete and comprehensive database of zoos in the UK. There are currently more than 300 licensed zoos in operation across the country.

Born Free’s investigations have revealed that many zoos in the UK do not provide their animals with the best possible living conditions or standards of care. Every year, we receive many visitor reports concerning animal welfare in UK zoos. We investigate these concerns, where possible, and raise concerns with the UK authorities, as well as encouraging the wider public to speak out.

Practices in many UK zoos, such as the use of bullhooks on captive elephants, the pinioning of birds’ wings to prevent flight in captivity, and the culling of surplus animals are all major issues of concern. Born Free is concerned the current zoo licensing and inspection system in the UK often fails to guarantee animal welfare. Researchers from Born Free and the University of Bristol published an analysis of the reports of government-appointed inspectors from 192 British zoos. 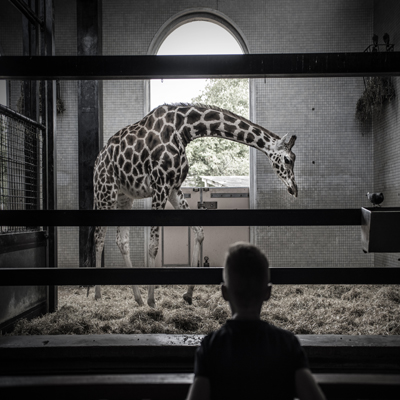 This analysis highlighted concerns about the inspection process, and identified areas where changes would lead to improvements in both the inspection process and the monitoring of animal welfare standards in zoos. Overall, the findings indicated that zoos in Britain were not fully compliant with the Zoo Licensing Act.

Incidents in UK zoos, such as the exposé of conditions at South Lakes Safari Zoo and the frequent escape of many animals from zoos, highlights the urgent need for improved standards and more rigorous inspection processes to ensure the basic animal welfare and safety standards are in place.

Since 1984, British zoos have been required to meet the standards set out under the Zoo Licensing Act 1981. Under the Act, a zoo is defined as an establishment where wild animals (those not normally domesticated in the British Isles) are kept for exhibition (except in a circus or pet shop) to which members of the public have access, with or without charge for admission, on seven or more days in a year.

In Britain, local authorities are responsible for the licensing and inspection of zoos. Government-appointed zoo inspectors, who carry out formal inspections every three to four years, assist local authorities in considering zoo licence applications and renewals. Operating licences are renewed every six years. Zoo inspection reports should inform the local authority of the inspector’s opinion whether the zoo is meeting legislative requirements. Reports can include suggestions for improvements that should be made to the facility, and recommendations that the local authority attaches specific conditions to the zoo’s licence, which require the zoo to make compulsory improvements within a set period of time.

The Act is supplemented by the Secretary of State’s Standards of Modern Zoo Practice, which sets out guidance on animal accommodation and general zoo practice. Other considerations taken into account include public safety, public facilities and staff training – all of which should be assessed during the formal inspections. 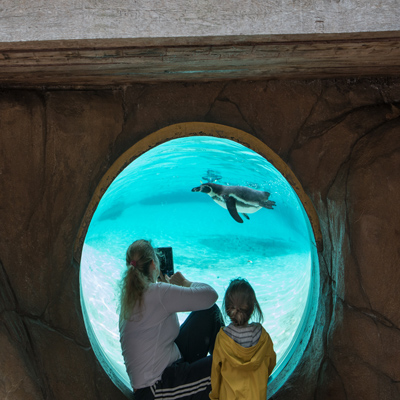 The Act has been updated to reflect the requirements of the EU Zoos Directive (European Council Directive 1999/22/EC). Northern Ireland has separate legislation, where zoos are licensed under the Zoo Licensing Regulations (Northern Ireland) 2003.

WRITE TO YOUR MP

Many UK zoos frequently promote themselves as centres for species conservation and public education.

Born Free questions whether the conservation credentials of UK zoos should be taken on trust alone. For example, despite frequent claims of their role in conservation, almost every zoo in the UK keeps more species at lower risk of extinction than those threatened with extinction. Our 2021 reports, Conservation or Collection and Zoos: Financing Conservation or Funding Captivity? highlight that the majority of species found in the UK’s 'Consortium of Charitable Zoos' are not classified as 'threatened' in the wild.

The funding of conservation in the wild by zoos is also a relatively tiny sum, especially when compared to the funds zoos spend on advertising and catering, for example.

The evidence for the positive educational impact of zoos is not strong, with research into this field hampered by poor methodology. Despite claims to the contrary, it is not clear that visiting zoos leads to beneficial educational outcomes for children or adults. 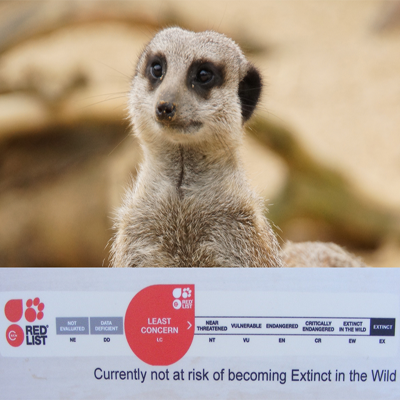 We investigate, expose suffering and neglect, and recommend improvements to animal welfare and legislation, while encouraging an informed public to consider directing their support away from the keeping of wild animals in zoos and instead protect them in their natural habitat.

As a priority, Born Free is calling for the following actions in the UK: 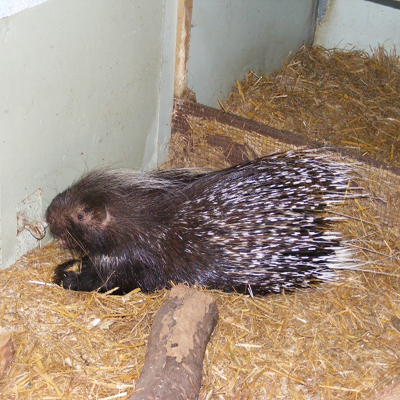 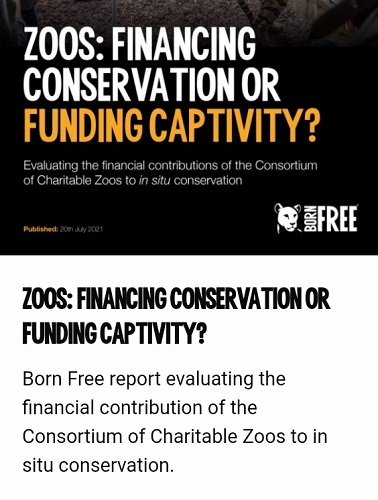 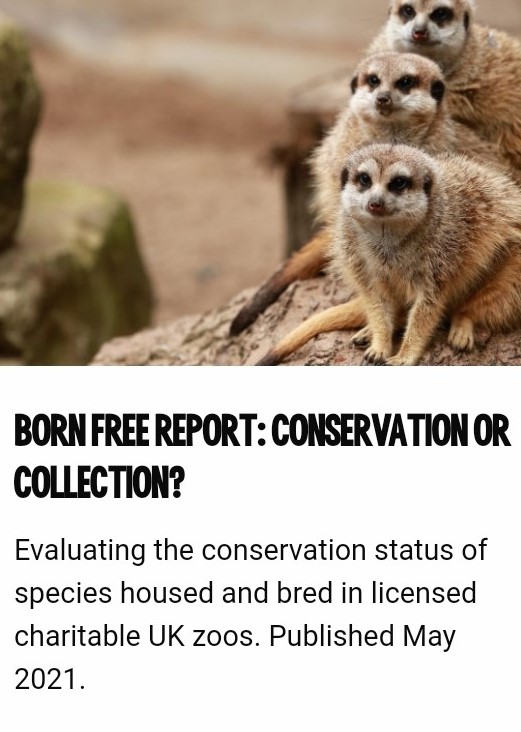 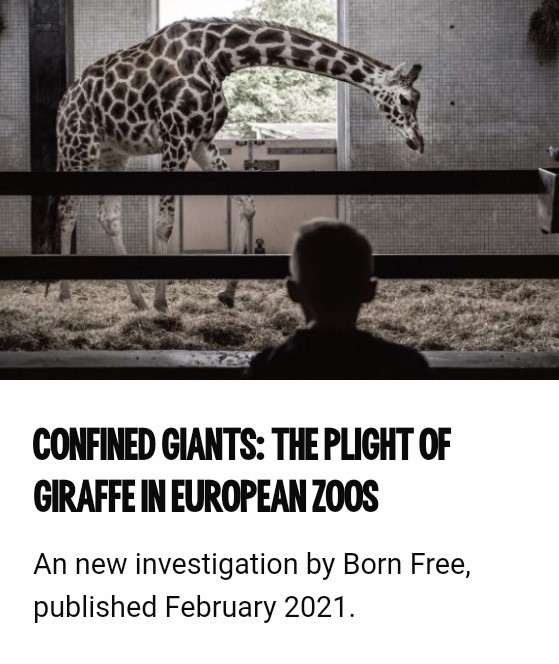 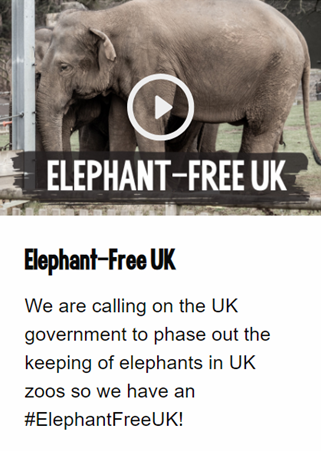 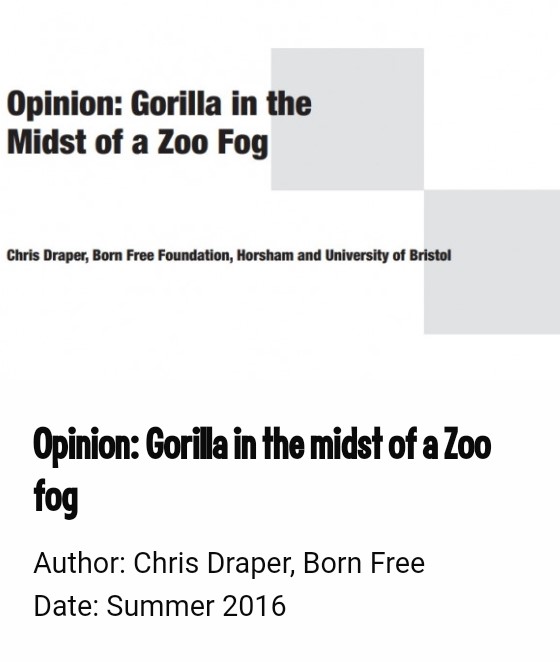 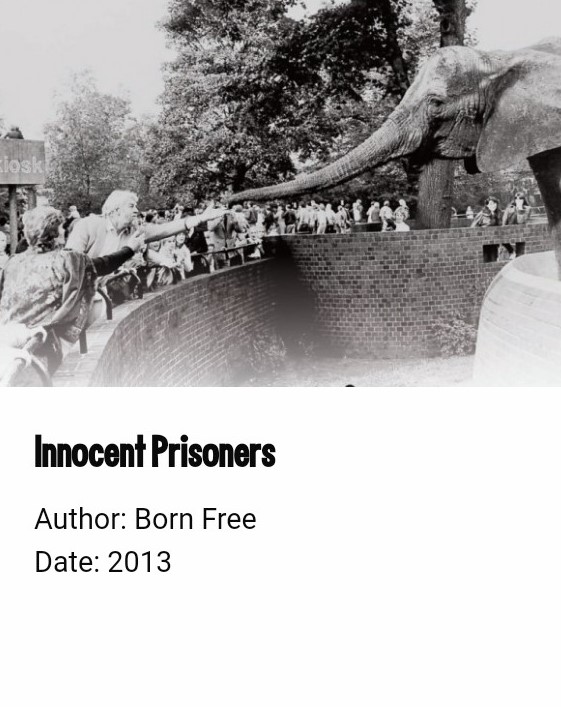 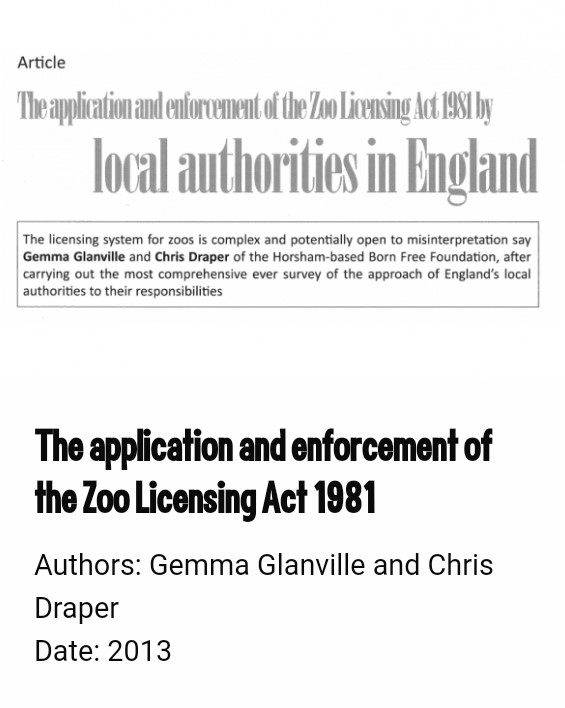 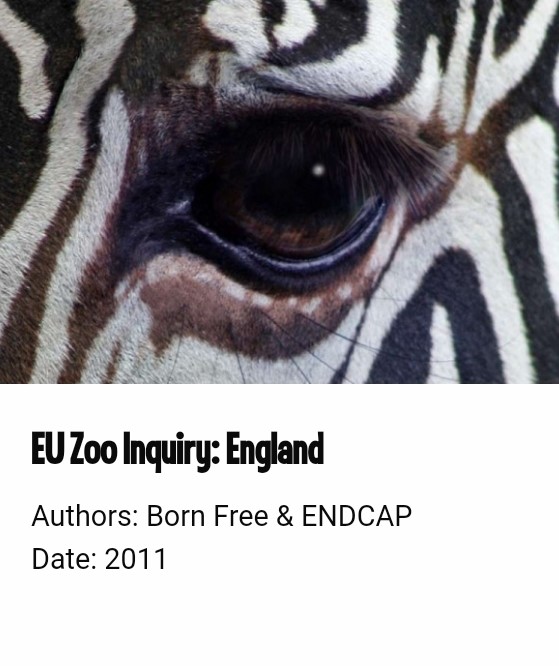 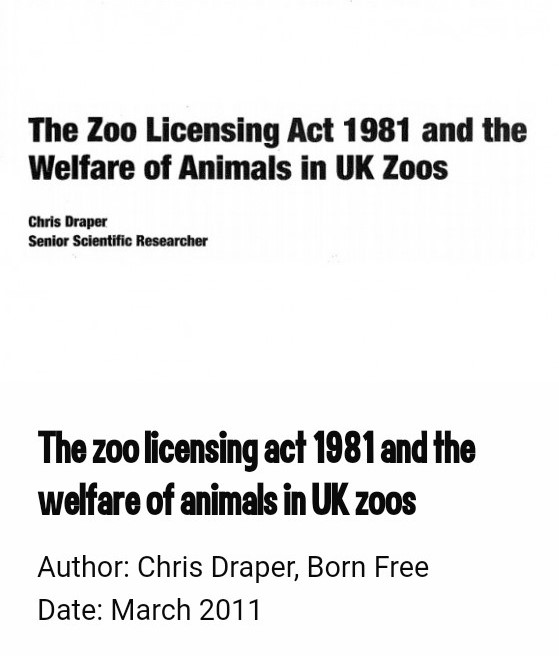 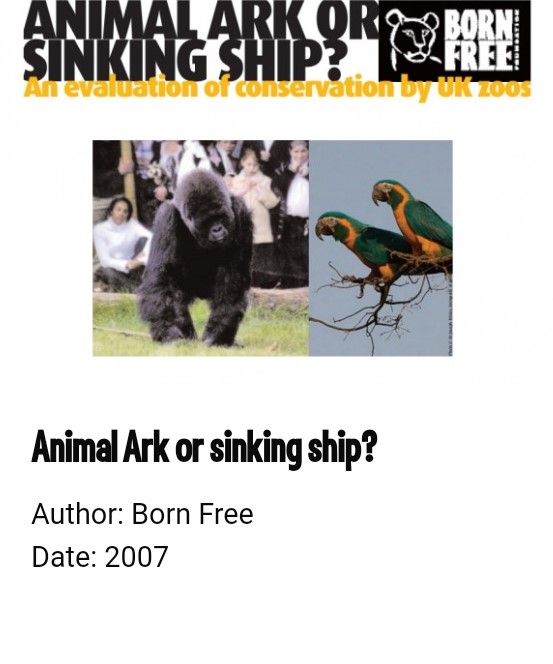 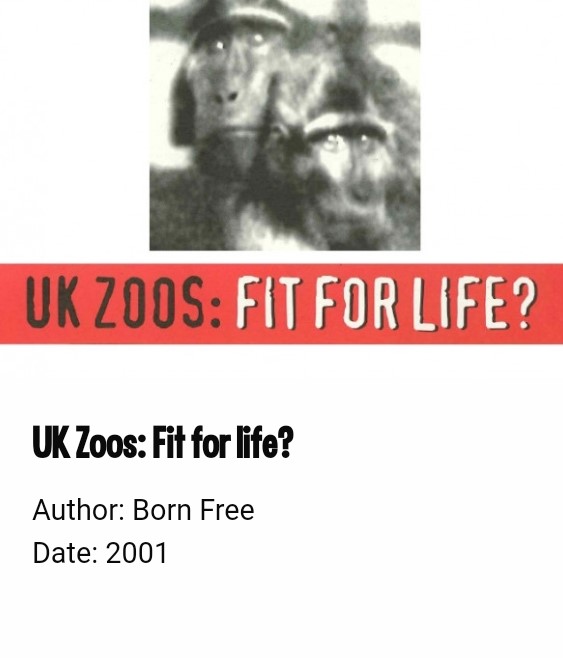 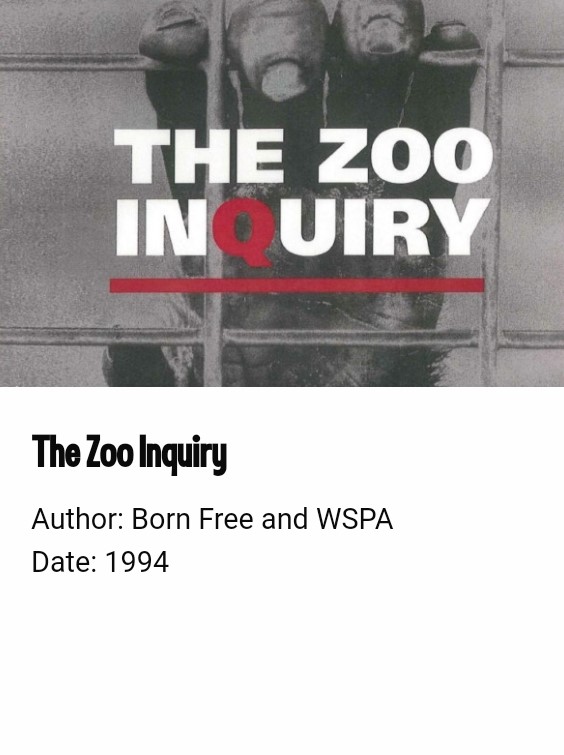 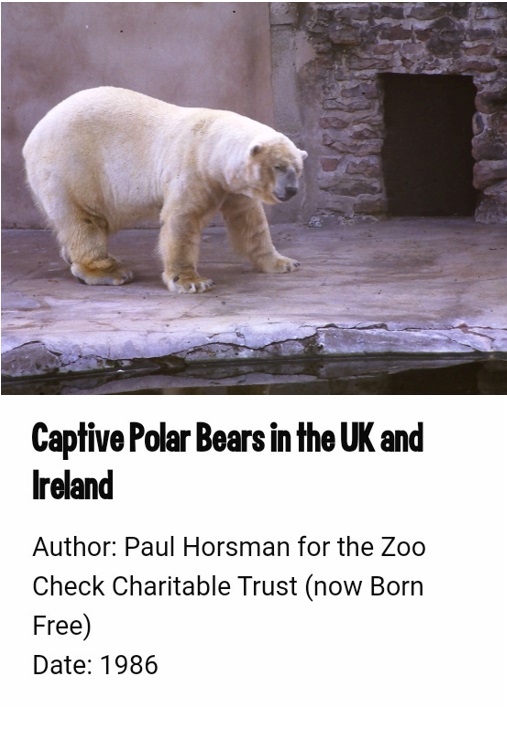