News of the death of a tourist who had posed for a photograph with an Indian cobra, again highlights the dangers of interactions between people and wild animals. Born Free is deeply concerned about the recent surge in reports of unsuspecting tourists being injured, or worse, following interactions with wild animals whilst on holiday. In particular, people are being placed at risk of injury when encouraged to hold or pose with a wild animal for a souvenir photograph. Wild animals are naturally unpredictable and potentially dangerous.

In this particular case, the tourist was visiting Jodhpur in India and was reportedly encouraged by a snake charmer to pose with an Indian cobra around his neck. Snake charming, where a musician plays a flute-like instrument in front of a ‘swaying’ snake, has been outlawed in India since the 1970s. Snakes are not able to hear music and the observed swaying movement is an anti-predator response to the vibrations and close presence of the instrument they perceive to be threatening. It is therefore unsurprising that the cobra attacked this tourist, who sadly later died from poisoning.

Born Free encourages travellers to look out for animals and send in reports on animal exploitation. 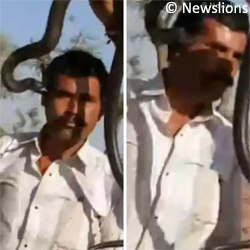