ORANGUTAN ESCAPES ENCLOSURE AT CHESTER ZOO FOR A SECOND TIME

A Sumatran orangutan is reported to have escaped its enclosure at Chester Zoo on Sunday afternoon.

The full details of the incident are not yet known, but it is believed a young Sumatran orangutan, Indah, managed to escape into the keeper area near her enclosure. Staff closed the area off from visitors, and Indah was later recaptured.

The incident comes less than a year after the same area was closed off due to four orangutans escaping the exhibition; and just months after a gorilla, Kumbuka, escaped in to the staff area of his enclosure at London Zoo.

While we are relieved that both Indah and the visitors are safe, the Born Free Foundation is concerned that, despite last year’s escape, Chester Zoo have seemingly failed to address issues with the safety and welfare of both their animals and visitors. We are calling for an urgent inquiry into the circumstances surrounding the escape. 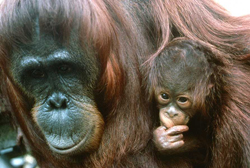