Born Free has welcomed an announcement by the International Union for Conservation of Nature (IUCN) that the mountain gorilla is no longer classified as Critically Endangered.

After decades of conservation efforts, including anti-poaching patrols by dedicated rangers, scientific research and community initiatives in mountain gorilla habitats in Democratic Republic of Congo (DRC), Rwanda and Uganda, the status of the mountain gorilla has improved and they are now classified as Endangered.

Habitat loss, poaching and civil unrest caused mountain gorilla numbers to plummet. In 2008, there were only 680 individuals left. Today, there are more than 1,000 mountain gorillas.

Whilst this is a remarkable success, there are still serious threats to mountain gorillas including restricted habitat area surrounded by intensive agriculture, disease, climate change and low genetic diversity. Therefore, it is critical that the current level of protection afforded to the mountain gorilla continues.

Other gorilla subspecies are still facing grave threats. For example, in the DRC, the population of the Grauer’s gorilla has declined by 80% to fewer than 4,000 individuals. This subspecies is still Critically Endangered. 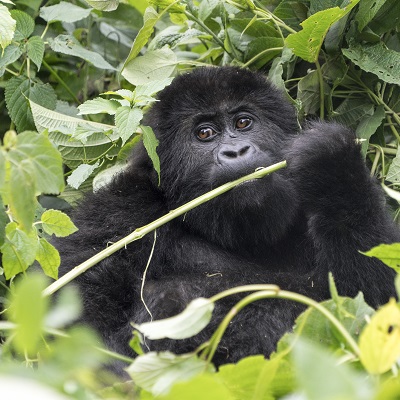 Born Free supports daily health monitoring and surveying of Grauer’s gorilla in Kahuzi-Biega National Park, a stronghold for the subspecies.

This positive news from IUCN gives conservationists and Born Free hope that our efforts can change the tide for gorillas.