ELEPHANTS IN ZOOS: A LEGACY OF SHAME

Powerful Born Free report exposes the reality of elephants exploited in captivity, and calls on zoos to become elephant-free.

“Elephants are living treasures, nature’s great teachers, gardeners of the forests. They no more belong in a zoo or a circus than in the sea or the sky itself. It is fundamentally wrong to confine these beautiful animals for our entertainment. This must end now.”
Virginia McKenna OBE, Born Free’s Co-Founder & Trustee

The report reveals the true extent of the pain and suffering being caused by the keeping of elephants in zoos across Europe. In Europe alone, there are still 580 of these magnificent herd animals held in zoos, including 49 in 11 establishments in the UK. Using powerful individual case studies, the report, Elephants in Zoos: A Legacy of Shame, outlines the history and continuing plight of these captive elephants. It lays bare the, at times fatal, impact of captivity on the physical and psychological health and welfare of the individuals involved. It is a horrifying fact that the majority of elephants in European and North American zoos develop and display abnormal stereotypic behaviours, such as compulsive rocking and swaying, as a consequence of long-term psychological damage.

The comprehensive report identifies zoos as net ‘consumers of elephants’, mainly due to high infant mortality rates, poor reproductive success, and reduced longevity. Shockingly, the report highlights that 40% of infant elephants in zoos die before they reach the age of five.

Born Free’s research goes on to reveal the impact that capturing wild elephants for captive display has on the social stability and conservation of wild populations. This, in turn, has serious knock-on effects on the wider ecosystems of which elephants are a vital part.

The report also underlines, through multiple real-life examples, the ethical and public safety concerns associated with the keeping of elephants in zoos. In the wild, these highly intelligent and social animals roam across vast ranges and live for up to 70 years or more in complex multigenerational families and societies. By contrast, Elephants in Zoos: A Legacy of Shame, highlights how elephants in zoos are confined in enclosures that are sometimes only a little larger than a football pitch, with an average ‘herd’ size of just three, and are, at times, housed on their own. As a result, they can suffer dramatically shortened life expectancies, a multitude of health problems, and cannot participate in the rich social and behavioural norms of their species.

The facts, scientific analysis and individual case studies speak for themselves. The report concludes that elephants do not belong in captivity and clearly recommends that the keeping of elephants in zoos should be phased out. 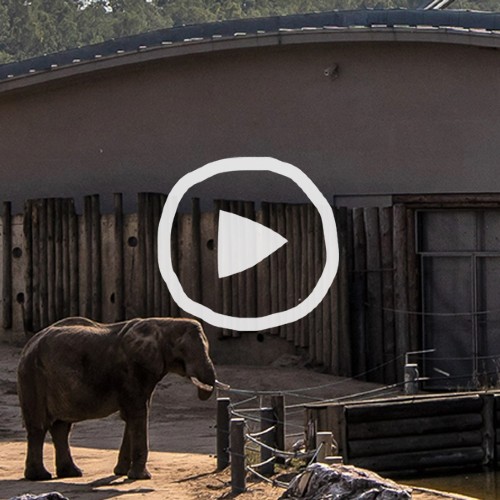 This conclusion and the timing of the report is of critical importance in the UK, where the Government is currently reviewing its Standards of Modern Zoo Practice. It shines a light on the archaic, unethical, and damaging practice of keeping elephants in zoos.

Born Free is, once again, reiterating its call for the capture of wild elephants for captive display to stop, and the attempted breeding of elephants in zoos to be brought to an immediate end. At the same time, every effort must be made to ensure those elephants that remain in captivity are provided with the best possible conditions to try and meet their welfare requirements and ensure their well-being for the rest of their lives. The charity, which was started as a result of the destruction of Pole Pole, an elephant in the London Zoo in 1983, is urging the public to read and share this report, and to write to The Rt Hon. George Eustice MP, Secretary of State for Environment, Food and Rural Affairs, urging him to take action to bring this travesty to a permanent end.

Born Free's new report has been backed by a number of prominent and highly respected conservationists and elephant experts.

“This report comes at a time when the British government is considering the findings of a decade-long review into the keeping of elephants in UK zoos and is consulting on revised Standards of Modern Zoo Practice. Born Free is urging that any changes to zoo standards relating to elephants be designed to secure the phasing-out of elephants in UK zoos.

We have tinkered around the edges for long enough, and more baby steps are not the answer. Elephants do not belong in zoos. Pole Pole, the elephant whose sad death at London Zoo in 1983 sparked the formation of what was to become the Born Free Foundation, was just another tragic statistic in a catalogue that overflows with tragic statistics. Let us be bold. Let us be brave. Let us be principled. Let’s stop this now.”

“This report confirms what anyone who has witnessed elephants in the wild already knows: To confine elephants is to condemn them to a life sentence. These are creatures who mirror humans in so many ways, from their emotional depth, to their intellect, to their very lifespan. They value family above all else and spend a lifetime nurturing their loved ones, traversing great distances and shaping ecosystems in the process. No zoo in the world can provide elephants with the complex social structures and vast spaces they need to thrive. The drastically reduced lifespans, low breeding rates, and poor mental health of elephants in captivity, as outlined in this report, are testament to that fact. Given how much we know about elephants, it is our moral responsibility to ensure no more are subjected to such purgatory — and to find solutions for those who are.”

"Any objective comparison between the lives of wild, free-ranging elephants in Africa and Asia and the conditions provided for them in zoos must conclude that the latter are far from sufficient to ensure their physical and psychological well-being. Zoo enclosures are many orders of magnitude smaller than the natural home ranges to which elephants are adapted and accustomed, and can never provide the variety, diversity or quality of habitats and social environments which elephants need to thrive. ‘Elephants in Zoos: a legacy of shame’ highlights, through well-documented evidence and compelling case studies, the severe restrictions endured by elephants in European and North American zoos and the resultant toll taken on their minds and bodies. The UK Government needs to commit to a timetable for ending inhumane practices in this country and, as they are phased out, to measures for ensuring that all currently confined elephants can live out their lives with dignity and meaning.”

“The phasing-out of elephants from zoos is the only option to ensure the long-term protection of elephants and Born Free’s latest report - Elephants in Zoos: A Legacy of Shame - highlights this, pure and simple. There are major challenges when it comes to providing high welfare standards for elephants which zoos have not overcome.

The global captive breeding and trade in elephants needs to stop immediately, with arrangements made to ensure that existing elephants in zoos can either live out the remainder of their lives in the best possible conditions or be returned to the wild, where possible. That’s why I am sending all my elephants to a new, wild life in Kenya. It’s time all zoos did the right thing. If they don’t then government must step in to make sure the zoo industry acts without delay to bring this sorry chapter to a close.”

“The attempted captive breeding and capture of wild elephants to be imprisoned in zoos is plain wrong and here is all the evidence to prove it. A tragic catalogue of inhumanity wrought upon a creature we claim to love. It must end today.”

“Elephants are living treasures, nature’s great teachers, gardeners of the forests. They no more belong in a zoo or a circus than in the sea or the sky itself. It is fundamentally wrong to confine these beautiful animals for our entertainment. This must end now.”

“The global zoo industry’s failures when it comes to the successful keeping of elephants continues to create demand for the export of wild-caught elephants to restock zoos, resulting in unimaginable lifelong suffering and shortened longevity for the individual elephants concerned, and serious disruption of the herds from which they are taken.

The capture and export of wild elephants for captive use is opposed by elephant scientists because it serves no conservation purpose. Yet elephants continue to be targeted for capture. Born Free’s new report, Elephants in Zoos: a legacy of shame, highlights why this travesty must end.”

David B. Casselman, founder and CEO of Ecoflix and Co-founder of the Cambodia Wildlife Sanctuary

“This report outlines the history and continuing plight of elephants in zoos across the United States, Canada, and Europe. Along with a comprehensive review of recent literature, our analysis includes over 800 elephants reported to be in zoos across these regions and reveals the stark contrasts between the lives of elephants in captivity compared to those in the wild. Wild elephants live in large herds, range over hundreds to thousands of kilometres of natural habitat in suitable climates, and individuals can live into their seventies. By contrast, captive individuals continue to suffer reduced lifespans, high infant mortality, poor health, inadequate social opportunities, and enclosures thousands of times smaller than their wild range.”

Our research in Amboseli reveals that a single female knows the calls of at least 100 other elephants. The social life of an elephant is marvelously rich in the wild; it is pitifully restricted in a zoo. Elephants in Zoos: A Legacy of Shame argues convincingly that it is time to phase-out the keeping of elephants in zoos. I would agree.”

“These animals experience a huge range of problems, including poor breeding success, high infant mortality, rampant infectious diseases such as EEHV and tuberculosis, obesity, and a range of serious foot problems, all of which contribute to psychological issues and reduced longevity endured by elephants in zoos compared to their wild counterparts. We can surely no longer countenance such suffering for the sake of our entertainment. It’s time to phase-out elephants from zoos.”

“If there was any need for more proof that elephants don’t belong in zoos, then Born Free’s new report is it. They have suffered (and continue to suffer) for far too long. ‘Elephants in Zoos: a legacy of shame’ pulls no punches and should mark the end of this tragic journey of exploitation, littered with victims of human vanity. Retiring elephants to true sanctuaries or, where possible, returning elephants to the wild, are the only humane ways forward. Investing, instead, in the successful conservation of wild elephants and their natural habitat, as we have done in Kenya, must be our top priority.”

"Captive elephants are twice-trapped beings: caught at once within the physical and psychic confines that prevent us, their 'keepers,' from regarding and respecting who they truly are. Elephants are not spectacles. They are complex individuals with highly developed and impressionable psyches, and a lifelong devotion to family and social interaction that exactly mirror our own. Captivity, as this report clearly demonstrates, destroys all that for elephants. And all for the sake of some zoo cotton candy and few of our fleeting 'Ooh's' and 'Aha's'."