Thank you for choosing to help bring the exploitation of captive wild animals in Marrakesh to an end.

The Jemaa El Fna square in Marrakesh, Morocco, is a world-famous market selling local produce and crafts. But it is also a site of animal exploitation and cruelty. Having received so many reports from visitors about the animal suffering in the square, in 2019 Born Free visited Marrakesh to investigate – and what we uncovered was truly shocking.

Many Barbary macaque monkeys are being exploited for money as props for tourist photographs. These animals have chains around their necks and are dragged from visitor to visitor. Many were dressed in clothes or nappies, and all were exposed to crowds of people and loud noises with nowhere to hide. They are manhandled, sometimes hit, and crammed into dark travelling crates.

The source of these animals is also of great concern. Barbary macaques are classified as Endangered by the International Union for the Conservation of Nature and there are estimated to be fewer than 15,000 left in the wild. In 2016, they were granted the greatest possible protection against commercial trade. Despite this, it is believed hundreds have been taken from the wild within Morocco to supply the appalling photo prop trade and trade in wild animals as pets.

The monkeys are not alone in their suffering: snakes, eagles and pigeons are all regularly used as tawdry tourist photo props.

The exploitation taking place at Jemaa El Fna seems to be tolerated because some people think it is traditional. We don’t believe tradition should ever be an excuse for animal suffering.

Please show your support for an end to the abuse of animals in the Jemaa El Fna square by sending an email to the mayor of Marrakesh, urging him to put an end to these activities. Let’s end Morocco’s shameful mistreatment of monkeys and other animals. 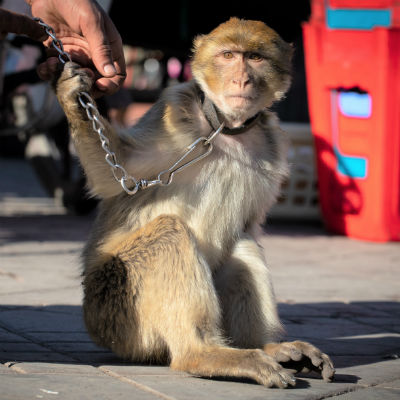 WRITE TO THE MAYOR OF MARRAKESH

Send a pre-written email to the Mayor of Marrakesh, Mr Mohamed Larbi Belcaid, calling for an end to the abuse of animals in Jemaa El Fna. 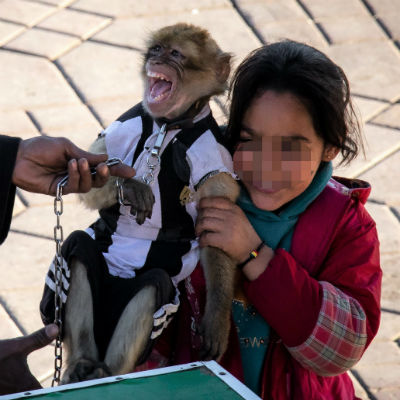 Donate today to help Born Free in its campaign to end the exploitation of wild animal in captivity for human entertainment. 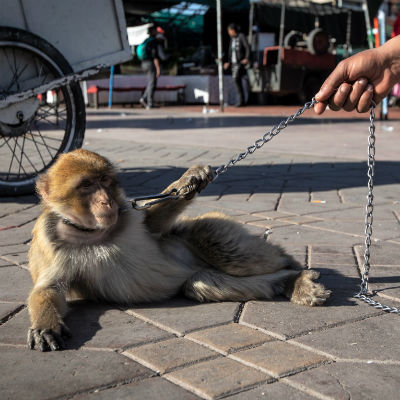 Born Free is calling for an end to the abuse of animals in Jemaa El Fna, Marrakesh. If you agree, please share our campaign with your family and friends.