Thousands of tigers are kept privately as ‘pets’ worldwide but you can support our campaign to make this illegal in Great Britain.

The plight of big cats kept privately in captivity was thrown into the public eye in 2020 with the release of Netflix’s Tiger King. Watched by 64 million households in its first four months alone, no doubt many viewers in Great Britain felt this dire exploitation was unique to the United States. However, the release of ITV’s Britain's Tiger Kings - On The Trail with Ross Kemp in March 2021 highlighted the conditions big cats, kept by private keepers, also face in this country.

Whilst it is now widely documented that there are more tigers in captivity in the United States than remaining in the wild, there is no figure for how many tigers are kept privately as exotic pets throughout the world. Differences in national legislation means reliable data on the private ownership of exotic wild animals is hard to come by. In fact, in some countries or states it may be easier to purchase a tiger than it is to adopt a dog!

Many people might assume the only tigers in Britain are in licensed zoos. Sadly, this is not the case. In 2020, Born Free’s research revealed at least eight tigers legally kept by private keepers under the Dangerous Wild Animals Act 1976.

As Ross Kemp made clear in Britain’s Tiger Kings: “When I first started making these films, I didn’t think it was possible to privately own a lion or a tiger in this country… I’ve found it truly eye-opening and disturbing to discover just how easy it is to source one and get permission to keep legally.”

The reasons behind the demand for keeping tigers and other big cats as pets are perplexing to say the least. 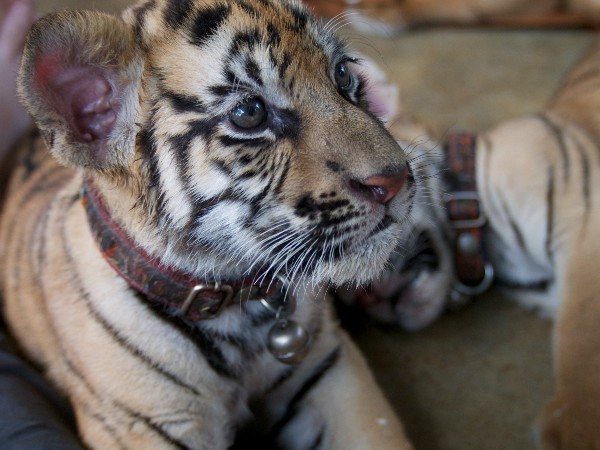 "Being kept as someone’s ‘pet’ or trained to perform for human entertainment is entirely inappropriate for these intelligent, wide-ranging apex predators, evolved to live on their wits in the wild."

Perhaps, some consider owning a tiger a status symbol, or the thrill gives them an adrenaline rush. Whatever the reasons, images and videos of tigers in private homes in different parts of the world can be found across social media.

Such content risks glamorising the keeping of these dangerous wild animals and desensitises viewers to the hazards and suffering involved. Unsuitable environments, inadequate diets, unnatural social-groupings, boredom and stress are all factors affecting the health and welfare of captive tigers. This often leads to unnatural ‘stereotypic’ behaviours such as repetitive pacing or self-inflicted injuries, as animals try to cope with frustration – their natural instincts to hunt and patrol denied.

On top of this, owners are often inexpert and inexperienced. Sadly, any mistakes or failings in care procedures risk deadly consequences for the owner and other members of the public. Being kept as someone’s ‘pet’ or trained to perform for human entertainment is entirely inappropriate for these intelligent, wide-ranging apex predators, evolved to live on their wits in the wild.

Current licensing of dangerous wild animals, including tigers, kept by private individuals in Great Britain is covered by the Dangerous Wild Animals Act 1976. Whilst the legislation acknowledges the need to protect the safety of the public, it fails to address the safety of the owners, potential risks to the public and the wider environment resulting from escapes. It also fails to address how such trade potentially compromises the conservation of species in the wild, and the welfare of the wild animals in private hands – including the complex behavioural, environmental, social, and nutritional needs many of these exotic species require.

Born Free has consistently lobbied for the laws on the private keeping of Dangerous Wild Animals to be reviewed and reformed. Please support us by signing our petition.

Please also look out for our major new report produced in collaboration with the RSPCA. The report will examine the wider exotic pet trade in the UK, including its scale and the associated risks, whilst also offering potential future solutions.