Wild tigers face many threats to their survival. Find out how Born Free's Living with Tigers programme is working alongside local communities to protect them

Wild tigers face many threats to their survival, including human-wildlife conflict, poaching for their body parts for traditional ‘medicine’, and habitat loss due to deforestation and rural development.

In Satpuda, central India, where Born Free’s Living with Tigers programme operates and an estimated 500 of India’s 2,000 tigers live, the most significant threats are loss of prey, conflict and development.

“In the last five years we have tackled poaching very well,” explains Kishor Rithe, Founder of the Satpuda Foundation, which is a partner of the Living with Tigers network. “Around 50 notorious poachers are behind bars and there is an understanding among poachers and traders working with them that if you do any kind of crime in Maharashtra, it is difficult to get out of jail.”

Although tiger poaching is being stamped out, hunting and poaching of other wildlife still occurs, which has a knock-on effect on tigers. 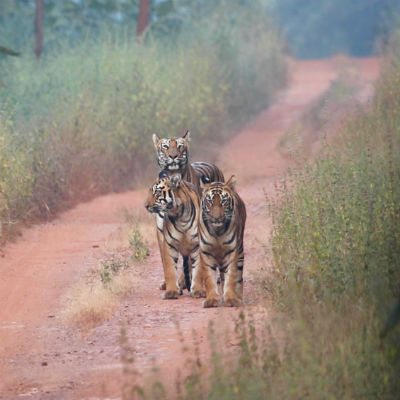 “Tigers are affected by loss of prey,” says Poonam Dhanwatey, Co-Founder of the Tiger Research and Conservation Trust (TRACT), part of Born Free’s Living with Tigers programme. “When there is lack of prey, then tigers tend to go closer to villages to try and get livestock. And if hunters lay snares or live wires, tigers can be killed.”

Development is a major issue because although Satpuda has seven tiger reserves which are protected from development, outside those reserves the pressure on land for human and agricultural development is intense. Satpuda’s tiger reserves are connected by forest corridors which allow tigers and other wildlife to roam freely across hundreds of miles of natural habitat. However, if these forest corridors are threatened by development, tigers are forced to venture nearer human settlements, increasing the risk of human-wildlife conflict.

“The tiger is under threat because their habitat is being destroyed,” says Harshawardhan Dhanwatey, Co-Founder of TRACT. “Damage to habitat is one of the largest threats to tiger conservation.”

Rithe agrees: “There are canals, roadways, railways, transmission lines and all sorts of projects that are proposed across the landscape. I believe that every responsible agency should think about ecological security and have inbuilt mitigation plans with their project proposals.”

Over the next few weeks, we will be sharing the work of Living with Tigers and explain how its initiatives are working with local communities across Satpuda to mitigate these threats and ensure wild tigers are protected for future generations.