MUCH OF THE FOOTAGE OF WILD ELEPHANTS USED IN OUR ELEPHANTS IN CRISIS CAMPAIGN WAS FILMED ON LOCATION IN SOUTH AFRICA BY OUR FILMMAKER FILIP FORTUNA. BUT HOW DID WE GET THAT FOOTAGE? BORN FREE'S BETH BROOKS DESCRIBES AN UNFORGETTABLE ENCOUNTER

“Are you comfortable if I stop here and see what they do?” our ranger Steff asked.

We were in the middle of Shamwari Private Game Reserve, in South Africa’s Eastern Cape, a mere 25 metres from a 20-30 strong herd of elephants.

We’d headed out into the reserve earlier that afternoon in the hope of filming wild elephants. We’d already encountered some incredible wildlife, including the southern giraffe, a pod of hippos and a rare white-fronted bee-eater.  After spotting the hippos, our ranger got the signal over the radio we had been waiting for. Elephants had been sighted in the south of the reserve.

Twenty minutes later, we were in place. Filip sprang into action and started filming what became an unforgettable encounter.

The herd – obviously interested in our vehicle but equally determined to keep their line of course – began to slowly make their way towards us. Young and old, big and small, they moved closer. For such huge creatures, they were impossibly quiet in their movements and the only noise was the crunch of the undergrowth they pulled out of the earth with their trunks.

The distance between us and the elephants became shorter and shorter, until, suddenly, they were all around us. They took their time passing - eating, watching, and, for the young, playing. One calf found a discarded boot and enjoyed an impromptu game of football. An older elephant brushed so close to the vehicle, we felt it move.

It was a precious few minutes of mutual respect between human and animals. For a privileged moment we had been granted access into their simple, peaceful world. With humans destroying elephants at a rate of 55 a day or about one every 25 minutes, did we deserve this trust?

As the sun slowly set and the shadows lengthened, a warm orange glow was cast on these beautiful creatures, creating the perfect light for filming an icon of the African landscape. 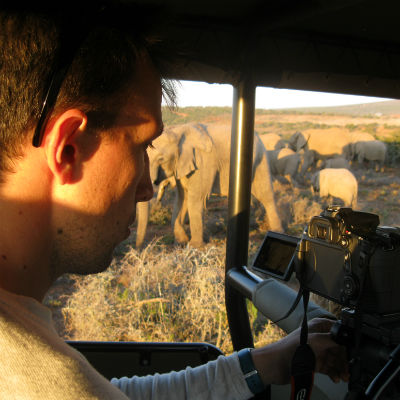 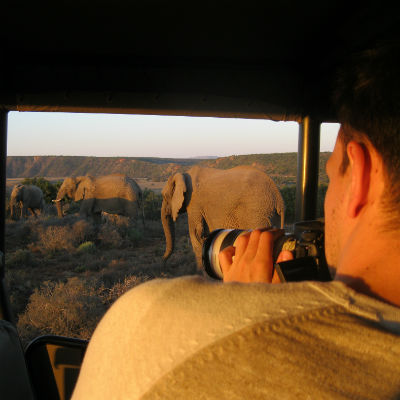