WHY WE MUST BAN THE BULLHOOK

Bullhooks are used to train and control elephants. Find out why we are calling for an end to their use in UK zoos

Also known as an ankus or goad, a bullhook is a stout pole with a metal hook and a metal tip on the end. It is used in training and controlling elephants by a handler applying pressure to sensitive points on an elephant’s body.

The bullhook is sadly a familiar sight in circuses around the world – the sharp hook often disguised by tassels – or when riding elephants in Asia.

However, few people realise the bullhook is still in use in at least two zoos here in the UK (Colchester Zoo and Woburn Safari Park). Inspection reports revealed the bullhook was in use at West Midlands Safari Park as recently as 2017, but the zoo has neither confirmed nor denied its use to Born Free, despite repeated requests. 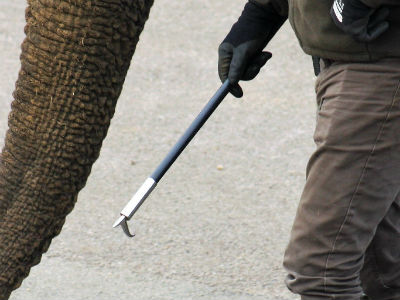 In protected contact, staff remain outside the elephants’ area, and any care or vet treatment is done through a protective barrier.

In free contact, handlers will go into the same space as elephants. If you see elephants in zoos being walked in public areas with their keepers, this is an example of the free contact handling system.

Free contact puts keepers at risk. With the close and unprotected proximity between keepers and elephants, it is hardly surprising that free contact systems have been associated with keeper injury and death.

It also has an impact on the relationship between elephant and keeper. The bullhook is usually involved, and relies on coercion and the reinforcement of painful or aversive stimuli. While this implement is often referred to as a ‘guide’, in order for it to be effective, elephants will be fully aware of its ability to cause pain.

Born Free is convinced that – at the very least – implements associated with pain should not be part of daily life for elephants in the UK. We are calling for an end to the use of the bullhook. And the public agrees. In an Ipsos Mori opinion poll carried out in the UK for Born Free in February 2019, 78% of the public said the use of a bullhook was unacceptable.

We are also calling for a phase out of elephants from UK zoos, through our Elephant-Free UK campaign. We are convinced the complex behavioural, emotional and physical needs of elephants simply cannot be met in captivity. A phase out can be achieved over time by a moratorium on breeding in zoos and a ban on imports of elephants into the UK.

It seems many people share our concerns. More than half (56%) of those polled by Ipsos Mori thought elephants should not be kept in zoos in the UK (compared to only 28% who thought they should).

“An honest assessment of zoos in the UK would conclude they are no place for elephants,” said Dr Chris Draper, Born Free’s Head of Animal Welfare & Captivity. “Life in the wild is increasingly tough for elephants, certainly, but life for elephants in zoos is neither a genuine alternative to life in the wild nor free of significant hardships. The UK should have no part in continuing to subject such magnificent and complex animals to the restrictions of zoo life.”