In 1964, actress Virginia McKenna OBE and her husband, actor Bill Travers MBE, went to Kenya to make and star in what would become a wildlife classic, Born Free. The film was based on Joy Adamson's best-selling book of the same name – the extraordinary tale of how she and her husband George raised Elsa, an orphaned lion cub, before releasing her into the wilderness of Kenya.

Learning about the plight of wild animals during the making of the film was a life-changing experience for Virginia and Bill, who went on to make a number of wildlife films and documentaries together, including An Elephant Called Slowly with a young wild-caught elephant calf called Pole Pole. After filming, Pole Pole was gifted to London Zoo by the Kenyan government despite Virginia and Bill’s protests. Years later, Virginia and Bill went to the zoo to visit Pole Pole. Seeing her distress, they launched a campaign for her release but Pole Pole died in 1983, aged just 16.

The premature death of Pole Pole led to Virginia and Bill establishing Zoo Check in 1984 with their eldest son Will Travers OBE. Zoo Check evolved to become the Born Free Foundation in 1991. Today, Will Travers is Born Free's President. 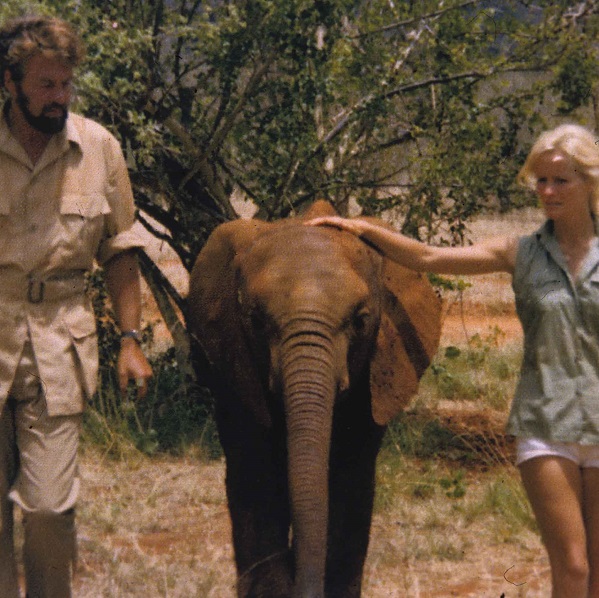 “Making Born Free in Kenya had a tremendous impact. Bill and I learned to love lions and love Africa. Guided by George and Joy we began to understand how every animal is individual and that wild animals belong in the wild.

We feature Elsa the lioness on our charity logo. The true story of her journey to freedom inspires everything we do. We never forget the importance of the individual.”

Bill, Virginia and their son Will Travers launch Zoo Check – a charity to prevent captive animal suffering and phase out zoos.

Beyond the Bars book published to draw attention to the plight of captive animals.

European Survey of Zoos sets out to investigate 340 zoos but finds 1,007. This led to the 1999 EU Zoos Directive, requiring registration, as well as adherence to conservation, welfare and education criteria.

Elefriends – a coalition of wildlife charities including Zoo Check – formed with the aim of saving Africa’s elephants from brutal slaughter by ivory poachers.

Our huge ivory trade campaign, including a petition of 600,000 signatures, contributed to CITES imposing an international commercial ivory trade ban.

Into the Blue launched. The conservation coalition successfully returned three of the UK’s last captive dolphins to the seas off Caribbean’s Turks & Caicos Islands.

We started to support the Amboseli Elephant Research Project in Kenya, to study the behaviour and social dynamics of savannah elephants.

Zoo Check became the Born Free Foundation, drawing together all our animal campaigns under one umbrella, with the aims of undertaking animal welfare, conservation and public awareness campaigns to keep wildlife in the wild.

A global ivory ban was upheld by CITES, backed by another major press campaign and 1.9 million-name petition collected by Elefriends.

The UK’s last dolphinarium closed its doors due to the introduction of tighter new industry standards, following a campaign by Born Free.

We helped establish the Species Survival Network (SSN), the leading coalition of wildlife organisations working within the CITES framework. With Will Travers as President, SSN began its work to prevent exploitation of animals by reducing the impact of international trade.

We helped develop a significant chimpanzee sanctuary and education centre on Ngamba Island, Uganda, amid 100 acres of rainforest, where orphan chimps live in a community.

A report into the welfare of UK circus animals finds inadequate legislation; we called for a ban on wild animals in circuses.

Our high profile Stop the Clock campaign collected hundreds of thousands of signatures to try to persuade CITES that there should be no further trade in ivory.

We launched our Global Friends education initiative, linking communities and schools in Asia and Africa with neighbouring wildlife projects, and providing vital resources and positive action for wildlife.

We helped develop and support the Zambia Primate Project, rescuing sick, injured, orphaned and confiscated vervet monkeys and yellow baboons and returning them to life in the wild.

We established the Satpuda Landscape Tiger Programme, with a network of local conservationists, to develop community projects and save the wild tiger in India’s forests.

We began long-term support of the Last Great Ape Organisation in Cameroon as they helped capture and prosecute dealers in rare wildlife, especially apes and elephants.

Virginia McKenna was awarded an OBE for ‘services to wildlife and the arts’.

Born Free Kenya successfully lobbied to prevent 300 wild animals – lions, leopards, giraffe and more – from being exported to a life in captivity in Chiang Mai Night Safari Park in Thailand.

Our support for Animals Asia began, with the aim of stopping exploitation of moon bears, cruelly milked for their bile, and providing care for rescued bears in sanctuaries in China and Vietnam.

We launched It’s Time Parliament Changed Its Act report and campaign with the RSPCA, to end the use of wild animals in UK circuses.

The UK’s new Animal Welfare Act launched; we continued to lobby for an end to the use of all wild animals in circuses.

Our campaign with SSN to prevent resumption of the legal ivory trade successfully encouraged CITES to approve a nine-year moratorium.

Born Free USA launched an ongoing project to rescue monkeys from laboratories and give them lifetime care in their spacious Texas Primate Sanctuary.

Born Free USA successfully encouraged the US government to list the polar bear as ‘threatened’ under the US Endangered Species Act and prohibit the import of bear ‘trophies’ from hunting.

We funded accommodation, food and medical treatment for 18 brave gorilla rangers and their families, driven from their homes by armed militia in Kahuzi Biega National Park, DRC.

We opened our new Ensessa Kotteh Wildlife Rescue, Conservation & Education centre in Ethiopia to provide a home for a range of rescued animals and an education facility for local communities.

We supported an ongoing project to help Sri Lanka’s Elephant Transit Home rehabilitate juvenile orphan elephants, return them to the wild and monitor their progress.

We joined other EU animal welfare organisations to establish the European Alliance to End the Keeping of Dolphins and Whales in Captivity.

We worked with local conservationists in Argentina to protect wild jaguars by stopping illegal hunting and developing humane solutions to help communities keep their livestock safe from predation.

Following months of lobbying, MEPs voted in favour of an EU Action Plan on the Protection and Welfare of Animals to ensure improved standards for all animals in captivity.

InfoCircus coalition launched by Born Free with Spanish organisations, ANDA and FAADA, to highlight plight of wild animals in circuses in Spain with the aim of a total ban.

With ENDCAP, we helped authorities develop an EU Policy for Animal Welfare to improve standards for all wild animals in captivity in Europe.

We supported ABTA and tour operators in adopting a policy to reduce tourism’s impact on animal welfare and phase out ‘bad practices’.

Will Travers was appointed OBE for ’services to wildlife conservation and animal welfare’.

Virginia McKenna received an Honorary Degree of Doctor of Science from Nottingham Trent University for her dedication to wildlife.

Alongside partners FIAPO and others, we successfully ended the construction of dolphinaria and keeping of cetaceans in captivity in India.

Born Free received the World Tourism Award for impact saving wildlife and working with local communities across the globe.

We celebrated our 30-year anniversary.

After 30 years of lobbying, Virginia McKenna and Will Travers discussed wildlife protection with Prince Charles ahead of the London Conference on the Illegal Wildlife Trade 2014.

We launched an appeal and campaign to protect elephants in Babile Elephant Sanctuary in eastern Ethiopia.

We launched an extensive lion conservation project in Meru National Park in Kenya, the stunning landscape where Elsa the lioness was returned to the wild.

We helped the Giraffe Conservation Foundation protect West African giraffes in Niger, the most endangered sub-species in the world.

Virginia McKenna was granted an Honorary Doctorate of Art at Bedfordshire University for her ‘outstanding contribution to acting and conservation’.

Born Free merged with wildlife charity Care for the Wild, a new alliance uniting two of the leading names in wildlife protection.

After our successful campaign, a four-year funding grant is confirmed for Britain’s National Wildlife Crime Unit.

We joined Wildlife and Countryside Link – a coalition of British wildlife organisations to chair work on wildlife crime and trade.

We published a report reviewing 10 years of the UK’s Animal Welfare Act and calling for amendments to better protect animals used in circuses and the exotic pet trade.

With our support, a small group of cheetah were successfully relocated from South Africa to Malawi’s Liwonde National Park, 20 years after local extinction.

We sponsored Mali Elephant Project in West Africa, protecting one of only two populations of rare desert elephants.

We supported a project in Guinea-Bissau to develop a country-scale conservation strategy for western chimpanzees and other primates.

“The film Born Free was released in 1966, and it is abundantly clear that the understanding of wild animals – their natures, needs and desires – has improved dramatically since then.

Making Born Free led me, and my husband Bill, towards the realisation that wild animals should not be used for entertainment, and that wild animals are so intrinsically linked to their wild habitats that they simply don’t belong in captivity.

I am delighted that public opinion on the use of wild animals in entertainment has changed considerably since the release of Born Free, and I believe that we should draw a line under that chapter of history while keeping its lessons fresh in our minds.

More than 30 years on, our vision remains the same: to Keep Wildlife in the Wild.

“When it comes to our mission there can be no deadline, no end point. Our work must continue relentlessly, while wild animals suffer because of us [the human race], while species are threatened as a result of oppression and senseless human greed.

“Born Free is here for the long-haul. Our determination is stronger. Our resolve is greater. Our compassion does not diminish, it grows.”