In a surprise move, SeaWorld today announced their decision to end the breeding of orca (also known as killer whales) at all their marine park facilities. The decision was reportedly made through discussions with The Humane Society of the United States (HSUS), which has partnered with SeaWorld to influence and guide a change in the company's priorities.

“The Born Free Foundation welcomes the news that SeaWorld is to end the breeding of its 29 orcas,” stated Daniel Turner, Born Free spokesperson. “However, the Company still owns 29 orcas housed in restrictive and inadequate captive environments, which compromise the welfare of the orcas. We call on SeaWorld to seek higher welfare standards for their orcas and work to move them to a sea pen marine sanctuary instead of having them languish in captivity."

SeaWorld has been particularly under fire since 2013 with the broadcast of the documentary film, Blackfish, which exposed the suffering caused to orca, and potentially other dolphin species, by captivity. Public concern caused a decline in ticket sales and, as a result, a fall in SeaWorld’s value on the stock-market. This then led the multi-million dollar company to launch their “Blue World Project”, proposing larger tanks for their orcas at their San Diego facility. The application to the California Coastal Commission (CCC) to increase their tank sizes was then only permitted if SeaWorld agreed not to breed their animals, or transfer them to another facility. This week, we heard the sad news that Tilikum, SeaWorld’s most famous captive orca and “Chief Sperm Bank”, is dying. The cards have been stacked against SeaWorld for some time.

“The Born Free Foundation, and our partners across Europe and the world, all of which work tirelessly to challenge the captive dolphin industry and its significance to species conservation, will continue to focus on improving the welfare of orca (and other dolphin species) in captivity,” explained Turner, “and we will continue to keep a vigilant eye on SeaWorld and its actions, to ensure their new found direction remains on track.” 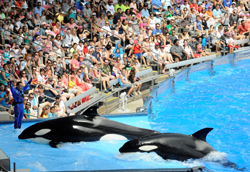