Born Free is proud to be sponsoring The Mali Elephant Project (MEP) in the Gourma Region of Mali, West Africa.

Across Africa, tens of thousands of elephants are brutally killed for their ivory tusks every year. Their populations are continuing to decline: nearly half of the total elephant population was lost between 1979 and 1989, plummeting from an estimated 1.3 million to just 600,000 individuals. Today, the Great Elephant Census reports only 350,000 elephants surviving, a decrease of 30% in just seven years. The IUCN lists them as Vulnerable.

Mali is home to an internationally important population of desert elephants – one of just two remaining in the world. These elephants are the most northerly ranging population, and make the longest recorded elephant migration of over 600 kilometres every year. Like other populations, Mali’s desert elephants are threatened by poaching. An influx of armed jihadist and rebel groups in 2012 contributed to a surge in poaching of this population for ivory, and Susan Canney, director of the Mali Elephant Project (MEP), reported that 83 elephants, representing about 20% of the total population, were slaughtered in 2015 alone. Other threats to this population include ongoing resource degradation, habitat destruction, and human-elephant conflict, exacerbated by limited resources in this drought-prone region. Unless urgent action is taken, this unique population may face extinction in three years. 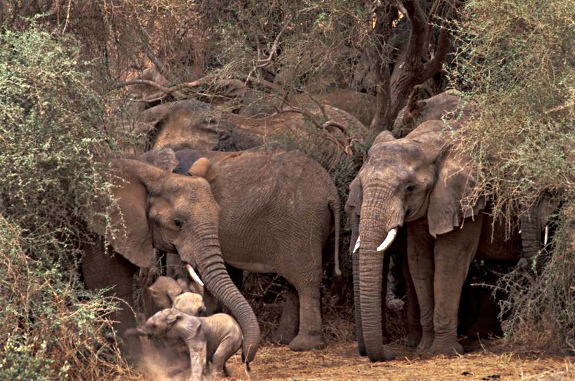 MEP, established in 2003, is protecting these fascinating and important elephants. The project works with local communities to limit resource degradation and over-exploitation, and to protect Mali’s remaining desert elephants and their habitats. The community-based natural resource management (CBNRM) aspect of the project has brought diverse ethnic groups together at community meetings in order to establish a collectively agreed-upon natural resource management system. These meetings encourage social cohesion and improved relations between different groups by uniting them under the common goal of protecting their shared resources for the long-term. To ensure these goals are met, MEP also provides natural resource management training, such as building fire-breaks or harvesting wild products sustainably. The adoption of these land use practices have benefited both people and elephants; for example, in July 2017, local laws were developed to reduce the widespread and destructive cutting of trees in important habitats shared by elephants and several local communities.

The project has also led to the creation of ‘eco-guardian’ positions for young men. With duties such as monitoring elephants, reporting poaching incidents, protecting elephant migratory routes, and collecting information to help the new anti-poaching unit (the first of its kind in Mali), eco-guardians have been instrumental in protecting this unique elephant population. They also undertake resource protection duties such as guarding important pasture, water, and forest areas from unsustainable land use practices. This has improved food and water security while also reducing conflict between humans and wildlife over these limited resources. MEP has also helped with peace-building in this volatile region, as the employment opportunities they provide to local communities are far more respected and offer safer alternatives to joining extremist groups. Indeed, although only paid in the equivalent of food, no eco-guardians joined the jihadists, who offered $30-$50 per day. With the support of Born Free, MEP was able to recruit and support 674 eco-guardians from local communities.

Results of this project have been outstanding, despite the ongoing insecurity. Thanks to the new anti-poaching unit and the mobilization of local communities, there have been zero poaching incidents since January 2017. This is the longest period of no poaching since 2013. Local communities prioritize and are better-situated to ensure the long-term protection of elephants, and they take pride in this unique desert-dwelling population, considering it part of the Gourma identity.

Insecurity and armed attacks increased in the elephant range in 2017, but despite this, MEP reports that their important work will continue: “the MEP field team, the anti-poaching unit, and the local communities remain fully engaged in the protection of the elephants and their habitats.”