Born Free is saddened to hear that Duchess, a female African elephant kept at Paignton Zoo, UK, has died. Keepers reportedly found 49-year-old Duchess collapsed in her enclosure on Sunday morning, and decided that euthanasia was necessary.

Dr Chris Draper, Born Free’s Head of Animal Welfare and Captivity said: ‘’Duchess’s death must signal the beginning of the end to keeping elephants in British zoos. It is understood that Paignton Zoo has committed not to keep elephants in the future. We hope that this principle is adopted across zoos in the UK. To put it simply, the complex needs of elephants cannot be met in a zoo environment.”Duchess arrived at Paignton Zoo in 1977 from Longleat Safari Park, having been taken from the wild in the early 1970s.

Duchess was previously housed at Paignton Zoo with a female Asian elephant called Gay, but has sadly been alone since Gay was put to sleep in 2010 due to chronic illness. 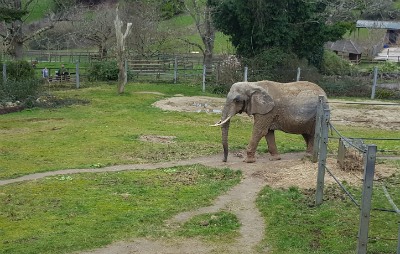 Born Free is calling for a phase out of elephants from UK zoos as part of its Elephant-Free UK campaign, where you can get involved by sending a letter to the Sec retary of State. You can also choose to show your support by adopting an elephant here.