Today we honour Nilesh Gawande, an individual who has worked tirelessly and unrelentingly for a future with tigers in central India.

Composed of 25,000km² of protected areas and surrounding corridors of forest, the Satpuda highlands represent the largest block of tiger habitat in India, and are now home to approximately 300 Bengal tigers. In 2005 the Born Free Foundation, in conjunction with the University of Oxford’s Wildlife Conservation Research Unit, established a network of organisations and individuals working for tiger conservation in the area under the umbrella of the Satpuda Landscape Tiger Programme (SLTP).

Here, Born Free’s partners have been are implementing a combination of conservation initiatives which address the serious challenges faced by the Bengal tiger and its habitat. In close collaboration with government and communities across the region, they work tirelessly to reduce the multiple threats facing tigers. Many people play a part in this struggle, from wildlife officials and wildlife organisations to concerned citizens and villagers living alongside tigers.

Nilesh was born and raised in Maharashtra state, where Melghat, Tadoba-Andhari, Pench, Sahyadri, Bor and Nawegaon-Nagzira Tiger Reserves are located. His heart has always been close to the forest and he has been an asset to conservation since joining the State’s Forest Department as a Range Forest Officer.

Nilesh was initially posted to Yawal Wildlife Sanctuary in the western part of the State, which was under assault from encroachers and land grabbers, and tasked with the difficult role of removing them. Supported by trusted field staff and his senior officers, Nilesh managed to clear encroachments from over 1000 hectares of forest habitat in the Sanctuary and made his protection camps operational 24hrs a day 7 days a week, by deploying young and willing young people to various roles. This led directly to valuable habitats being restored and to herbivores re-appearing, closely followed, by tigers!

Today, on the International Day of Forests, in the office of Maharashtra State’s Principal Chief Conservator of Forests and in the presence of representatives from SLTP partner organisations, the 2015-16 Award was presented to Nilesh Gawande. We join our fellow SLTP partners in not only congratulating Nilesh, but in drawing inspiration and motivation from his brave actions. 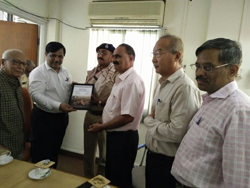