The report reveals widespread flouting of the law by many auction houses. It also confirms that a ban on ivory trade in the UK will have little impact on the commercial viability of auction houses.

Its publication coincides with a Government consultation on its plans to ban ivory trade in the UK.

TMT was formed in 2016, when four individuals who had been involved in campaigning against the ivory trade came together to investigate the extent and legality of ivory being traded by auction houses in the UK.

Their findings make for sobering reading. 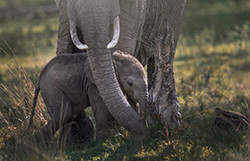 In 90% of cases*, auction houses couldn’t verify that ivory items were truly antiques – by law they should have been ‘worked’ before 1947 in order to qualify. In one case, a raw ivory tusk was being offered for sale and export, without any checks having been carried out.

Also, contrary to claims made by some auction houses that an ivory ban would put them out of business, the team found that ivory items represent less than 1% of the total number of lots for sale, with more than 90% being sold for less than £400. An ivory trade ban would have little impact on auction house businesses, which begs the question why they are fighting so vehemently against a ban.

The report concludes that the UK Government should implement an immediate ban on the trade in all ivory.

Born Free’s Associate Director Mark Jones said: “This important and timely report clearly demonstrates that ivory is being traded through auction houses without the necessary checks and verifications to ensure it complies with the current rules. The TMT team deserve huge credit. In recent years, the UK has been the largest exporter of ‘legal’ ivory, fuelling global demand and providing a means by which ‘new’ ivory from slaughtered elephants can be laundered into trade. With more than 20,000 elephants being killed each year for their tusks, it’s vital that ivory markets the world over are shut down, and the UK is no exception.”

Born Free is urging its supporters to engage with the Government’s consultation, and call for a ban on commercial trade in ivory into, within and from the United Kingdom.