New regulations to ban the use of wild animals in circuses, due to come into force in January 2018, were signed yesterday in the Republic of Ireland. Ireland’s Minister for Agriculture, Food and the Marine, Michael Creed TD, said in a statement released yesterday: “The use of wild animals for entertainment purposes in circuses can no longer be permitted. This is the general view of the public at large and a position I am happy to endorse. This is a progressive move, reflective of our commitment to animal welfare.”

Born Free’s Head of Animal Welfare and Captivity Chris Draper: “We are delighted that, just days after Italy announced similar measures, Ireland has opted to join the increasing number of countries acting to bring an end to wild animal suffering in circuses. The Born Free Foundation has worked closely with Irish campaign partners over many years to support this measure and would like to congratulate our Irish colleagues on this great achievement”.

The ban will be introduced under Ireland’s Animal Health and Welfare Act 2013 and will allow what the Minister has referred to as a “modest lead-in period” for circuses to make alternative arrangements for the animals.  The Born Free Foundation would like to extend an offer to any circuses in Ireland still using wild animals to work with us and the relevant authorities to formulate an appropriate plan for rehoming the animals, should this be required. 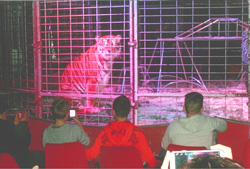 It is hoped that the moves in Ireland and Italy will add to the mounting pressure on the Westminster Government to act swiftly to bring in its own ban in England. Despite a promise made in 2012 to prohibit wild animals in travelling circuses by the end of 2015, wild animals remain in the big top.

Draper added: “The Westminster Government is being left behind as Scotland in the UK and now Ireland and Italy in the EU move ahead with decisive action to end this unethical and unpopular practice. Westminster needs to act promptly”.