News from our partners at the Lilongwe Wildlife Trust:

Wildlife crime history was set in Malawi this week with not one but two unprecedented court rulings - the first ever conviction of an individual dealing in rhino horn and, in a separate case, the first ever policemen to be convicted for wildlife trafficking.

Vwi Given Haiwa, a 35 year old businessman from Ntaja village in the Machinga District, had bought the horn from poachers who had killed the rhino in Liwonde National Park in February this year.  Haiwa who is named on the Interpol Red List, was charged with dealing in a government trophy (a rhino horn) and was sentenced to 8 years in prison with no option of a fine by Zomba’s Chief Resident Magistrate, Her Worship Agnes Patemba.

Eastern Region Prosecuting Officer for the Malawi Police Service, Dickens Mwambazi, who worked on the Haiwa case said, “These days those illegally trading in wildlife products must understand that, whatever their standing, they can expect punishments that befit what is a very serious crime. This is the first time ever that someone in Malawi has been convicted of dealing in rhino horn, and 8 years is not an insignificant time to spend behind bars.”

“For too long in Malawi, you could expect to walk away from court with a nominal fine if you were convicted of illegal wildlife trade.  Nowadays it is not just poachers but also traffickers that run the risk of being locked up in Malawi’s prisons for many years. The government and judiciary are to be commended on how they have handled two challenging cases involving high level traders and government officials.”

“These cases are further examples of the hard work and collaboration between government agencies and supporting NGO’s that are working together to tackle wildlife crime in Malawi.”

The Department of National Parks & Wildlife have been working alongside other government agencies and its supporting NGO’s have responded with several initiatives including the country’s first specialised multi-agency Wildlife Crime Investigations Unit. The Amendment Bill for the National Parks and Wildlife Act is also expected to come to Parliament in the next few weeks which will further strengthen penalties and act as a deterrent for would-be wildlife criminals.

Malawi was recently named as a ‘country of primary concern’ for its role as a major transit hub in the illegal ivory trade in a recent report published by TRAFFIC and ETIS (Elephant Trade Information System), alongside Togo, Malaysia and Singapore.

The country’s black rhino population currently stands at less than 30 and there are just 5000 black rhinos left in the world, down from an estimated 65,000 in 1970, due to poaching to satisfy demand for rhino horn in Eastern markets such as China and Vietnam.  Demand for ivory has similarly resulted in unsustainable poaching of Africa’s elephants, with the recent Great Elephant Census estimating a 30% decline in the last 7 years. 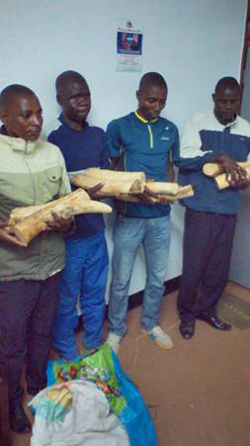