Confiscated as illegal pets in Belgium, we are delighted to announce that these incredible wild cats are settling into the safety and sanctuary of their forever home.

Four rescued servals, all likely bred in captivity and sold illegally as pets in Belgium have, this week, been given a fresh start on African soil. Their rescue, relocation and rehoming is thanks to a partnership between Born Free, Panthera Africa Big Cat Sanctuary in South Africa, Natuurhulpcentrum Wildlife Rescue Centre in Belgium and Etihad Cargo.

The four servals made their epic journey from Brussels, Belgium to Cape Town, South Africa earlier this week in specialist transport crates and climate-controlled conditions with their flights generously sponsored by Etihad Cargo. When they reached their destination and forever home, the team at Panthera Africa were delighted to see the servals relaxed, gently walking out of their crates into their night-houses, immediately taking their first meal and drink of water, and very soon after confidently and curiously starting to explore their large enclosures. Given it is the biggest space the cats have ever been in the team were amazed by their confidence and trust the first day of their new lives.

Since their rescues in 2019 and 2021 the servals have been cared for by the expert, dedicated team at Natuurhulpcentrum Wildlife Rescue Centre but they needed a lifetime home. So when Born Free heard about the cats, and their individual stories, they knew they could help by offering them a future in the Born Free Rescue Section at Panthera Africa Big Cat Sanctuary near Cape Town. Born Free then funded the build of four new enclosures designed especially for the needs of the servals. And it is here, nestled in the South African landscape, surrounded by space, naturally occurring vegetation and with purpose-built climbing platforms and a night house, that the servals are now relaxing into and adjusting to their new life.

The four rescued servals, Kinrooi, Mechelen, Roeselare, and Diepenbeek, are currently named after the towns in Belgium where they were seized by authorities. But each will now receive a new name, a move symbolic of their new start in their ancestral homeland.

“It is extraordinary to think that in 2022 we are needing to rescue and relocate servals, an African wild cat, from the European pet trade back to their ancestral home. However, after a long a complex process, and one that was made more difficult by the outbreak of COVID-19, it is amazing to know that these four servals will now be waking up in their forever home, bathing in the warm African sunshine and surrounded by the sights and the sounds of the bushland. Everyone at Born Free is extremely grateful to Etihad Airways who looked after our servals in flight on their journey to South Africa and we know they will live their best possible, life given their unhappy story so far, in the care of Panthera Africa.”

Native to Africa, servals are naturally elusive, wild cats, which have sadly become popular in many countries as ‘exotic pets’ and are even sometimes bred with domestic cats to produce a hybrid called the savannah cat.

Whilst the lives of these servals have been transformed there are many wild cats that are not so fortunate. In Great Britain alone there are at least 75 servals and 51 serval hybrids, part of a total 320 wild cats kept privately under Dangerous Wild Animal licenses.

Born Free fundamentally opposes the keeping of all wild animals as pets and is currently calling on the UK Government to consult on developing a robust Positive List system to restrict the keeping of pets to those species which meet strict criteria aimed at ensuring their welfare and conservation, and protecting human, animal and environmental health. You can support our call for reform concerning the private keeping of wild animals by writing to your MP and having your voice heard. 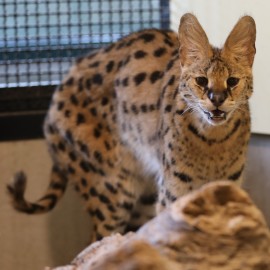