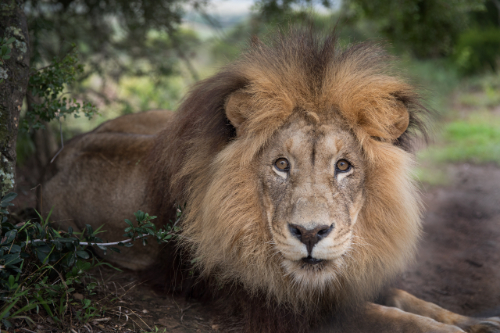 We are very sad to report that our beloved Sinbad has passed away.

Sinbad was a much-loved lion who had lived at Born Free’s big cat sanctuary at Shamwari Private Game Reserve in South Africa since 2007.

Born in Romania, as a cub Sinbad was used as a photo prop for tourists and then lived at a ramshackle zoo in Bacau. His growth was affected by the poor diet he received in his early years, which meant that he was half the size of most male lions. Despite his small stature, Sinbad had a big personality and bundles of energy.

Sinbad lost his companion Achee earlier this year, but he appeared to be coping well. However in recent weeks, his age and physical state seemed to be catching up with him.

Born Free’s Head of Animal Welfare and Captivity, Dr Chris Draper, said: “Sinbad had been exhibiting decreased appetite and not responding to his carers, so he was examined under sedation. Among other things, this revealed that Sinbad was dehydrated and anaemic, and also that he was now completely blind with cataracts. Taking into account his health, the likely prognosis, and his quality of life, we decided that the kindest thing would be to put him to sleep.

“Sinbad was a firm favourite among staff and supporters, and he will be greatly missed. But we can at least console ourselves with fact that we were able to offer 12 good years to a little lion who had such an appalling start to life.”

Catherine Gilson, Born Free Manager at Shamwari, said: “It’s almost not real that Sinbad has gone. He was (and always will be) one of our most popular lions.”