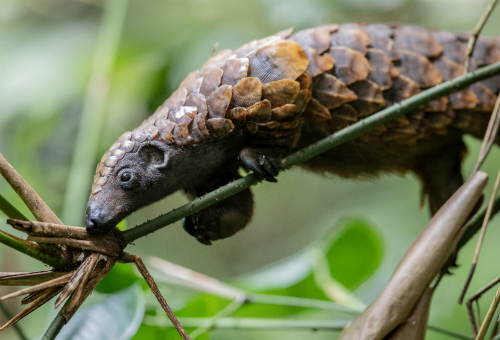 We are extremely sad to report that Pangi, our adopted pangolin, has passed away. Pangi was found to have acute peritonitis and sadly died in her sleep.

Pangi became an instant favourite with Born Free supporters after we reported how she was found orphaned, and taken in by the Sangha Pangolin Project in 2014, at just a few weeks old. She was carefully nursed back to health and returned to the wild under the watchful eye of the team, based in the Central African Republic.

As one of our most quirky adopted animals, Pangi introduced many people to her species and quickly became one of the most well-known and photographed black-bellied pangolins.

Born Free’s Animal Rescue and Care Manager Maggie Balaskas said: “Pangi was special to us at Born Free and we are thankful that with the generous support of the public, we were able to help her rehabilitation and return her back to the wild – where she belonged.

“During her short life Pangi became an ambassador for pangolins. We are proud that Pangi has led more people to recognise the world’s most trafficked mammal and understand the need to protect them.”