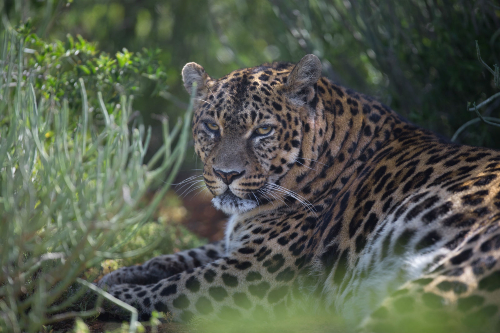 We are sorry to report that Leda, a member of our Leopard Family at Shamwari, has passed away. Leda was born in captivity. She was rescued along with her daughter Rhea from Limassol Zoo, Cyprus, in 2009, following a long-running Born Free campaign.

Although we did not know her exact age, we think she was approaching 30 years old. Despite her being in her golden years, Leda remained alert and active. Her spacious bush enclosure at our big cat sanctuary at Shamwari Private Game Reserve was next door to Rhea’s, and she was often spotted sitting right at the top of her climbing platform, making the most of the 360 degree view, and keeping a watchful eye on the wildlife  roaming in the area.

Born Free’s Animal Rescue and Care Manager, Maggie Balaskas, said: “Leda was a magnificent leopard. Despite her independent nature, the bond that Leda shared with her daughter Rhea remained until the end. She will be sorely missed by the team at Shamwari, who did a wonderful job caring for her over the years.”

Catherine Gillson, Born Free Manager at Shamwari, added: “Beautiful Leda was the oldest of our big cats at our sanctuary at Shamwari. We will all miss her, but we are grateful that we were able to care for her for many years and that her passing was peaceful.”