The Born Free Foundation has welcomed news reports suggesting that Secretary of State for Environment, Michael Gove, has reaffirmed the Government’s commitment to ban the use of wild animals in travelling circuses in England. The news follows recent progress in Scotland and the Republic of Ireland to bring an end to the unpopular practice, while Westminster has been criticised for its failure to act, despite promising a ban almost five years ago.

Born Free’s Head of Animal Welfare and Captivity, Chris Draper, said: “We are heartened to hear the DEFRA Minister, Michael Gove, restating his Department’s promise to ban the use of wild animals in circuses. Nonetheless, we are concerned to see news reports continuing to state that a Bill would be brought forward ‘when Parliamentary time allows’. Promises to ban when Parliamentary time allows have been repeated for the last five years, and have provided no respite to the animals still being exploited under the big top in England. What is needed now is a firm timetable for implementation of a ban and for the remaining circuses to be put on final notice. The Government must reflect the opinion of the public, Parliamentarians and experts, find the Parliamentary time, and put this issue to rest once and for all”. 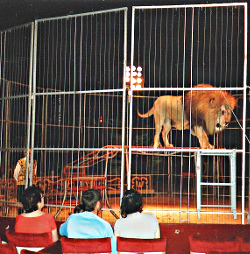 In late December, the Born Free Foundation issued a call to DEFRA to use the required review of the current licensing regime for travelling circuses with wild animals as an opportunity to lay out firm plans for the ban; and a number of MPs have supported our call.

The Born Free Foundation has campaigned for decades for a ban on wild animals in circuses in the UK and beyond, and in recent years has worked alongside partners the RSPCA, CAPS and BVA to bring an end to the use of animals such as lions, tigers, camels, zebra and elephants in circuses in England.