Born Free is elated by news from France that it will introduce a ban on the use of wild animals in circuses. It has also signalled an end to the keeping of dolphins and orcas in captivity, and banned mink farms.

Imagine being born in a cage, deprived of any freedom. Your life is spent behind bars, travelling in a beastwagon. Fear of the whip makes you perform demeaning tricks for the public. It’s a world so far detached from what nature intended for you. Sadly, this is the life endured by many wild animals in circuses around the world.

Angela, Bellone, Louga and Saïda are four lions who all shared this miserable existence. They were born in a circus in France and spent their entire lives travelling and performing. Louga was even castrated to make him easier to handle.

And thanks to our friends at French animal rescue charity OneVoice, Jon has just been rescued. Emaciated, declawed, and with barely any teeth, he was rescued in June 2020 from a circus in France where he was being kept illegally in appalling conditions

These lions desperately need your help. Together we can provide them with a better future.

Unfortunately, many thousands of wild animals are exploited in circuses worldwide. And not just lions. Elephants, tigers, zebras, bears, monkeys and even hippos – to name just a few – are deprived of a life in the wild so that humans can pay to watch them jump through hoops, balance on balls or ride on bicycles. When they’re not in the ring, they’re kept in small, barren beastwagons, or they’re on the road. Unbelievably, only 31 countries have banned the use of wild animals in circuses. In many parts of the world, this outdated show goes on.

Thankfully, the show is over for these five lions. Angela, Bellone, Louga and Saïda were surrendered by the owner of the circus and are currently living in a temporary home in France. Jon has also been rescued, but faces a long rehabilitation before he is well enough to travel to a sanctuary.

You can help them say goodbye to the circus, once and for all. For Angela, Bellone, Louga and Saïda, you can help by giving them a permanent home at our big cat sanctuary at Shamwari Private Game Reserve, South Africa. For Jon, you can help fund his rehabilitation and future relocation.

These lions are so deserving of a dignified retirement. 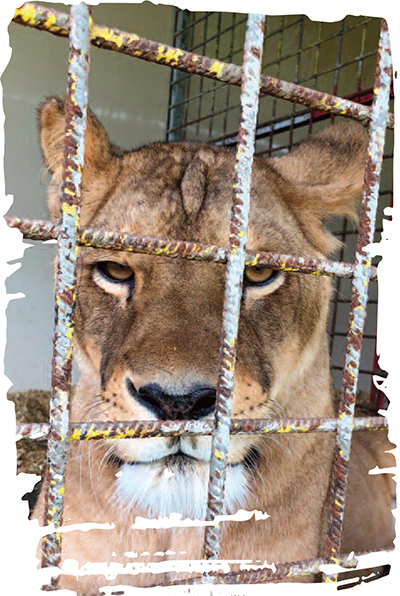 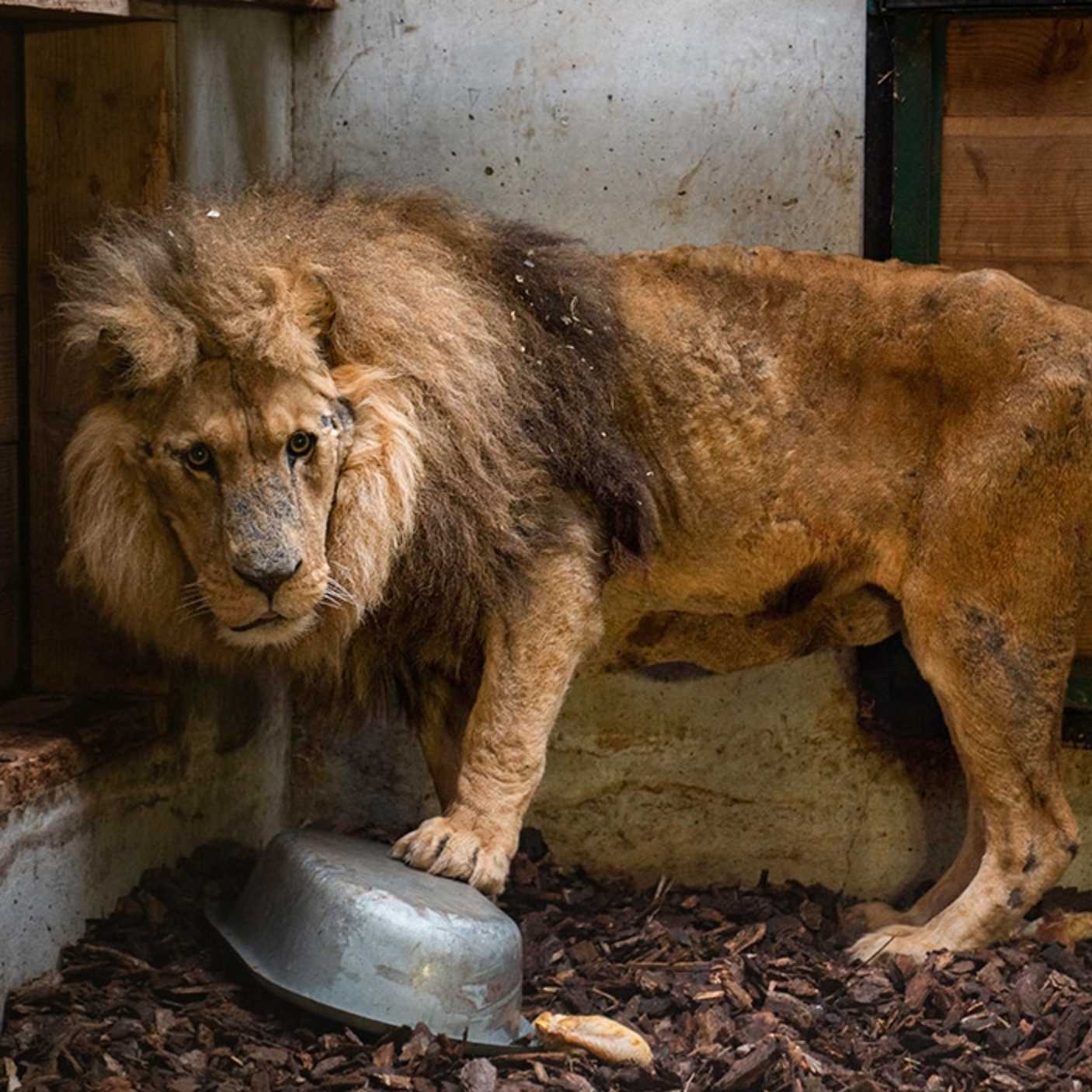 BREAKING NEWS! ANOTHER LION RESCUED FROM A FRENCH CIRCUS

"In all the years I have visited zoos and circuses, I have never seen a lion in such a pitiful, heartbreaking and shameful condition.” - Virginia McKenna OBE, Born Free's Co-Founder & Trustee

This is Jon. Emaciated, declawed, and with barely any teeth, he was rescued in June 2020 from a circus in France where he was being kept illegally in appalling conditions.

Jon is now being rehabilitated at Tonga Terre d’Accueil while legal action is taken to secure his lifetime care. We will then work to find sanctuary space for Jon, hopefully in South Africa.

Virginia McKenna OBE, Born Free's Co-Founder & Trustee, said: “In all the years I have visited zoos and circuses, I have never seen a lion in such a pitiful, heartbreaking and shameful condition.

"There are no printable words to express what I feel about all the people who, obviously, cared nothing for him. Allowing this beautiful animal not only to endure hideous captive conditions , but to starve him as well.

"In my view, the perpetrators of this cruelty should receive the strongest punishment. The circus should be closed immediately, all the animals rehomed – never to work in a circus again – and the circus owners and workers banned from owning or working with animals for life. Thanks to both OneVoice andTonga Terre d’Accueil, Jon is now beginning his slow recovery. Too soon now to know what his future will be, but we are always here to offer him one.” 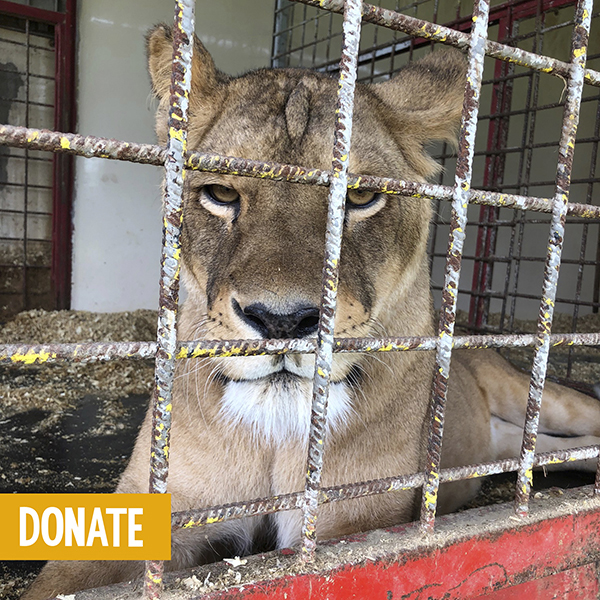 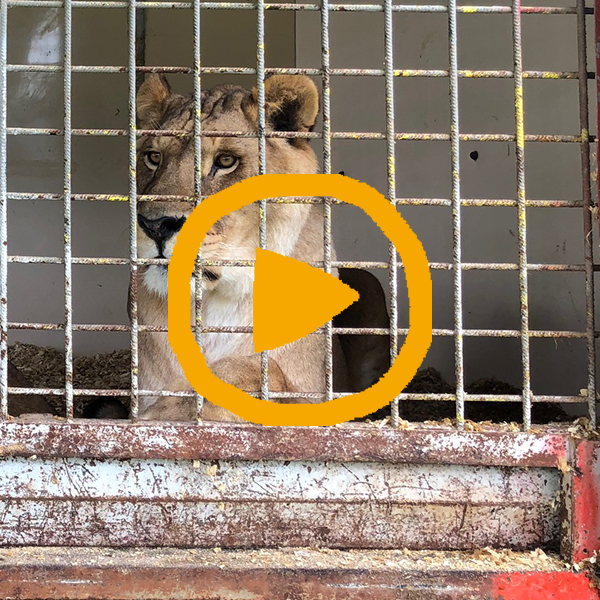 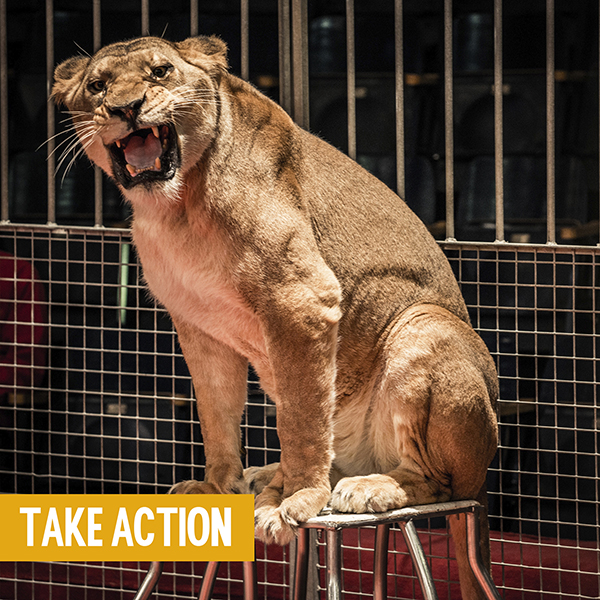 Angela, Bellone, Louga and Saïda were all born in captivity.

Angela and Louga were just one month old, and Bellone and Saïda four months old, when they were sold by one circus to another.

Louga is the only male and the reason why the lions were surrendered by the circus owner. Louga attacked the owner during a show, so the owner decided it would be best to part with them all. Although Louga is male, he has no mane because he has been castrated – but he more than makes up for this with his feisty character. The 12-year-old is definitely the dominant member of this man-made pride!

Saïda, who is 13, is feisty too, and, as a lion would be in the wild, can be defensive and aggressive around people. In contrast, 12-year-old Angela and Bellone, who is 15, are both generally calm and relaxed. 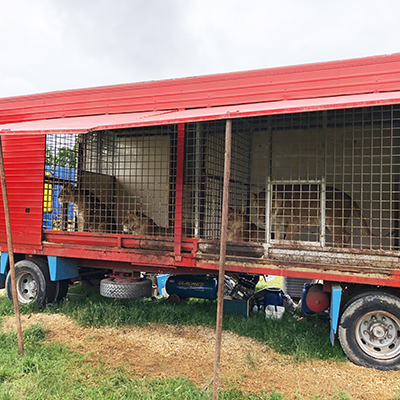 OUR PLANS FOR THE LIONS

Angela, Bellone, Louga, and Saïda are all living in a temporary home in France.

You can help give them a lifetime home at our big cat sanctuary in South Africa.

Our highly-experienced relocation team will prepare the lions for their journey and finalise all the necessary health checks and paperwork.

When everything is in place, travel restrictions have been lifted and it is safe for everyone to travel again – the lions will be relocated to South Africa.

Travelling from France to South Africa by road and air in their own individual travelling crates, they will be carefully monitored at every stage. When they arrive, we’ll introduce them to their new lifetime home – a safe, spacious and natural environment, a world away from the big top. 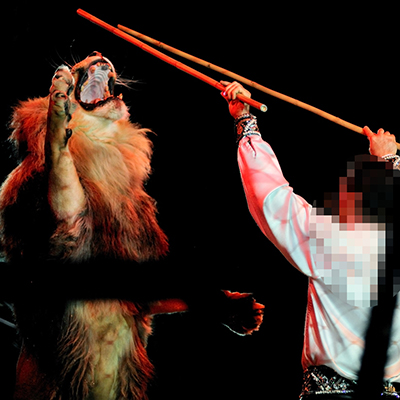 Your gift today will help fund the relocation of Angela, Bellone, Louga, and Saïda to South Africa and their lifetime care at our big cat sanctuary at Shamwari Private Game Reserve in South Africa, which is a safe environment for lions and leopards rescued from appalling captive conditions*. It will also fund Jon's rehabilitation and future relocation to a sanctuary.

*If we raise more money than we need for the lions’ relocation, the additional funds will go towards their lifetime care and/or future rescues. The lions will be relocated when all the necessary paperwork is in place, when all travel restrictions have been lifted, and when it is safe for everyone to travel. 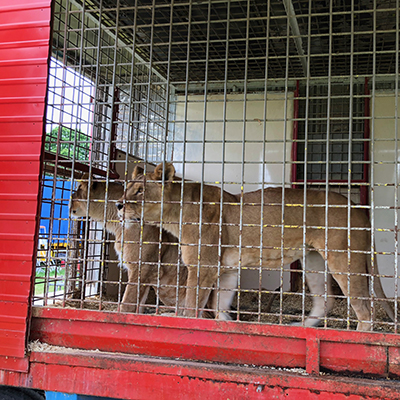