Elephant endotheliotropic herpesvirus (EEHV) is an infectious type of herpes virus found only in elephants. It is a complex disease and numerous forms of the virus have been discovered since the index case at Smithsonian National Zoo, USA, in 1995. Symptoms include swelling of the head and trunk, ulceration of the mouth and internal haemorrhaging. It seems that young elephants between two and eight years old are particularly susceptible to death from EEHV, and it is a significant cause of mortality. There is no known cure, but in a minority of cases treatment with antiviral drugs has been successful.

The virus may be present in many elephants without any symptoms being visible. Stress is a significant factor in triggering the disease, including, as a result of weaning, birth, movement of animals, introduction of new animals and dominance issues in groups. Since 2000, EEHV has been implicated in the death of at least 16 elephants in zoos and circuses in Europe, including 10 in zoos in the UK. While there is some evidence that the disease may be present in wild populations, EEHV is a very significant risk to young elephants in zoos and there is no vaccine or reliable cure. 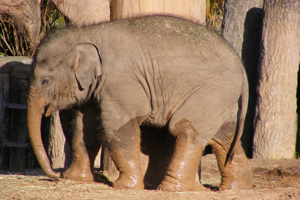 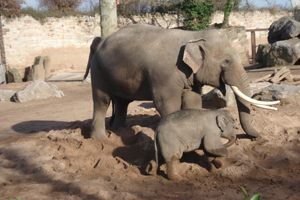 Tuberculosis (TB) in elephants is generally caused by Mycobacterium tuberculosis and M. bovis, species of pathogenic bacteria. This disease, which causes weakness and weight loss, is spread by airborne infected droplets, and appears to be an increasing problem in captivity. In recent years, TB has evolved into much more deadly drug resistant strains. In 2005, an outbreak of tuberculosis involving five elephants was reported at a zoo in Sweden, the disease appeared to have been brought into the zoo by two elephants that had previously been used in travelling circuses. TB in elephants is particularly significant as the disease can be transmitted to and from humans. 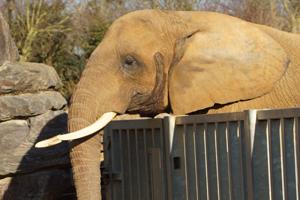 An elephant’s skin is very sensitive to the sun and in the wild, individuals will use mud or a dust bath to protect their skin. This also helps keep the skin in good condition, which is important in regulating body temperature and maintaining skin flexibility. Since captive elephants may have little or no access to dust baths or mud wallows, they are often unable to display their natural behaviour and skin problems may arise as a result. Prolonged periods of time in indoor enclosures creates the opportunity for pathological skin conditions not seen in the wild. Captive elephants living in countries with colder climates may have to spend longer periods of time indoors if it is too cold to be outside. The enclosure may be heated, which can dry out skin. Standing or lying in the same space where an animal urinates and defecates may also cause further skin irritation. 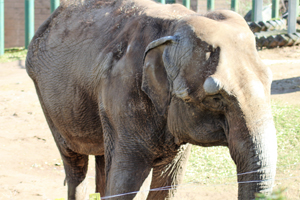 Captive elephants are subject to a relatively limited and controlled diet, dependent on provisioning by keepers. Unlike their wild counterparts, food may be easily accessible and require little energy or time to process. This, coupled with limited physical exercise, contributes to the prevalence of obesity in captive populations. 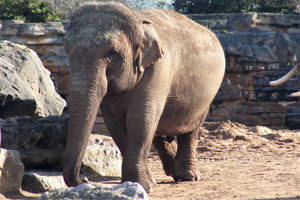 Joint and foot problems seem relatively common in zoo elephants, and may be the result of excessive body weight, lack of exercise and inadequate flooring. Excess weight bearing down on joints and feet can damage leg ligaments as well as contribute to arthritis, which may cause significant pain. In 2008, the majority of elephants in zoos were found to have foot problems and walking difficulties. Many elephants in UK zoos were found to have an obvious limp or lameness, an issue that has continued to be well documented. 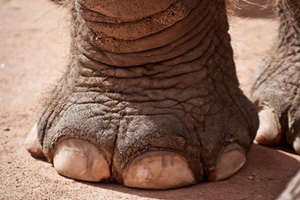