In a guest blog, Laura Craddock, Fundraising and Communications Manager at the Born Free-supported Limbe Wildlife Centre, reveals how the centre is rescuing and rehabilitating endangered African grey parrots

What do African grey parrots, chimpanzees and tigers have in common?

They may not be the first species that springs to mind when you think of an animal in danger of extinction, but just like the chimpanzee and tiger, African grey parrots are classified as endangered, too.

Native to the forests of equatorial Africa, the African grey parrot is probably one of the most social animals on the planet. They form enormous flocks of sometimes several hundred individuals, all flying together many miles every day, chattering to one another, and spending a great deal of their day foraging.

With a strong aptitude for problem-solving, the intelligence of a five-year-old child, and complex social skills, African grey parrots outshine many other species when it comes to intellect. And it is these characteristics that have resulted in the species being a hugely desired candidate for a pet around the world. Sadly, this means African grey parrots are one of the most traded birds worldwide.

And, of course, where there is demand, there is opportunity. To fulfil this demand, every year thousands of these incredible wild birds are illegally poached to satisfy consumer demand around the world. Around half will die from stress, dehydration and injuries caused during the capture and pre-export process. Those that survive are destined for an unnatural life in captivity. 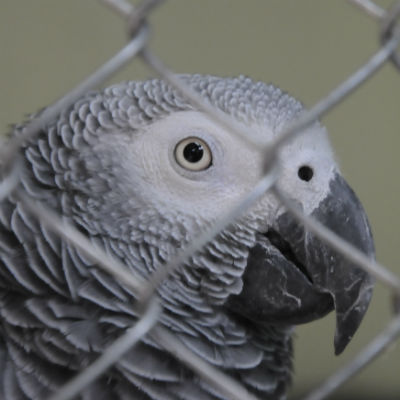 It is believed the African grey parrot population is reducing by some 20% every year, which is a key factor why the species was classified as endangered in 2016. This dramatic decline can be mainly attributed to the pet trade and loss of habitat.

The Born Free supported Limbe Wildlife Centre (LWC) in Cameroon is working to tackle this issue head-on by providing sanctuary and rehabilitation to African grey parrots seized by the authorities. Most arrive in terrible condition – ridden with parasites, their wings clipped, incredibly stressed and injured from the ordeal of being captured and then kept in small cages and boxes.

LWC’s goal is to rehabilitate them to return them to the wild as soon as possible. Their wings must regrow and they must learn to fly once again. Over the years, LWC has rescued more than 3,000 African grey parrots. This year, the centre is building a much-needed specialist aviary for the species, and will work further with the authorities to seize more year-on-year to support dwindling wild populations.

One recently rescued grey parrot was severely injured on arrival and appeared to have lost an eye as a result of abuse. After some weeks of specialist care, his injuries healed and he has now started his behavioural and social rehabilitation.

LWC is also working to educate Cameroonians to protect their unique environment and the wildlife within it, which is one of the most diverse in the world. But it is a job we must tackle together, as it is only when the demand for these magnificent but wild animals stops, that the poaching will stop, too.