I went on my first protest march last month and joined the crowds as we walked across London to Downing Street to speak up against trophy hunting. Every year, thousands of endangered animals are killed by wealthy tourists who pay huge sums for the ‘sport’. It’s hard to believe people still take pleasure in such a cruel practice and worse, choose to gloat with pictures and even stuff the animals to bring them home.
The experience brought home how:

A picture says a thousand words

The impact of graphic images alongside compelling words makes your message hit home and grab the attention of others. I took posters of animals – lions Born Free has rescued with their heads superimposed onto mounts as hunters would put above their fireplace. Many people asked where I had got them from and my only regret was that I didn’t bring more.

It’s a commitment to attend a march so make sure it is a cause you feel absolutely passionate about and genuinely believe in. It’s a long day and in my case, a chilly one too, with lots of walking around London. But it’s worth it to raise the profile of your cause, get others onside and embarrass those in power to do something about it. 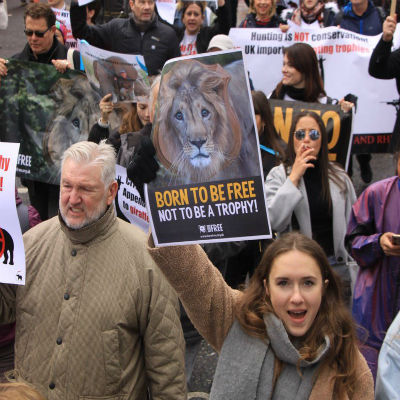 Even the smallest group of dedicated individuals can make a significant difference. If you are positive, informed and genuine about your cause, others want to listen and know more. I found myself talking to strangers who were keen to know more about the problems that trophy hunting cause. When one lion is pointlessly killed, it isn’t just about his life, but the impact it has on his cubs, who are left vulnerable to other males and the whole balance of the pride.

It takes just one really good speaker to capture the mood and the mission of your cause. On the march I attended, there was an embarrassment of riches, but for me, it was Bella Lack, Born Free’s Youth Ambassador, who captivated the crowd – and united even those who hadn’t come to London specifically for the march.

The UK government promised, by 2017, to ban lion trophy imports unless the hunting community made drastic changes. Today, the number of lions continues to plummet but their trophy imports are still allowed to enter the country – this sounds despairingly hopeless. And yet, walking through the streets of London side by side with friends, colleagues and strangers, we were all united by the same belief that cruelty will not pay. I truly left feeling inspired and motivated that we will be heard!

If you feel motivated to show you care about wildlife, please keep an eye out on our website and social media for similar causes that you might wish to join us on.