In the past few days my body seems to have metamorphosed whenever outdoors. My head felt like exploding, oxygen seemed limited leading to breathing difficulties, and the body would get sudden bouts of heat and then go limp. Despite rehydrating constantly, I would still feel peculiar. I almost made a dash to the hospital until I heard several other people complain of the same symptoms.  In those past few days, temperatures have soared, with some areas like Nairobi which would average 26˚C in the past, now topping 31 ˚C and above.

Drought is ravaging Kenya yet again. Last year, the country experienced a severe drought that saw both man and animals suffer for months. Over the years, the rainfall volumes have reduced drastically and the droughts become more frequent and intense.

Today, the country is clothed in gloom and despair.

The flow in the larger and permanent rivers in the country – Tana, Athi, Nzoia, Nyando, Ewaso Nyiro and more - is almost at a trickle.  In the past six or so years, rainfall has been below average. This has threatened the survival of many communities whose livelihoods are directly hinged on rainfall availability.  Encroachment on forests including felling of indigenous trees has been ongoing over the years leading to habitat loss for wildlife and diminished water supply. By reducing forest cover and wantonly destroying the environment, we are now reaping the biting effects.

Meru National Park is generally hot and humid on a good day with temperatures of 30-33˚C. On bad days, like this season, the temperatures have hit 35˚C. Nine out of the 13 rivers that flow through the Park have dried up. Wildlife in the Park is in grave danger.  That these rivers no longer have water flowing is because of climate change effects and agricultural activities upstream. Farmers who live upstream have been abstracting the water for irrigation purposes leading to depleted river flow in the Park.

The pastoralist communities around Meru Park and the contiguous protected areas of Bisanadi, Kora and Mwingi are living on the edge due to lack of rain.  With paucity of water, wildlife is now moving into community areas in search of the scarce life-giving resource. And communities are also moving their livestock into protected areas in search of pasture and the little available water. Inevitably, this leads to clashing between the communities and animals with both suffering casualties and the parks’ integrity compromised. A classic catch-22 situation!

Amboseli ecosystem is not any different. The water springs that the community depended for their livestock have either dried up or are in the process. Those who are farming have sank boreholes for irrigation. The sun is blazing and dust storms are more common. The wildlife have been migrating in search of pasture and water many a time coming into conflict with the community. The herders have driven their livestock to other areas in the country due to the severe drought.  It’s now common place to find livestock moving through Nairobi City and other towns. It’s dire!

What could be the problem? After all, policies have been formulated. We have sound expertise in environment and natural resources sectors. There may be a need to formulate new strategies and revise plans on how to adapt to climate change effects.  But we must take action now to end this situation which make us seem helpless and yet we know it is only by doing the right things that will ensure our collective survival.

We must seek ways to stop the encroachment into forests and their degradation and loss. Those involved in illegal activities regardless of stature must be prosecuted. When the rains come, we should plant trees in the millions and nurture them until they can grow on their own. We must also device simple ways to harvest water in every household. And environmental conservation should be given its principal position as a key aspect of achieving food security for the country.

There is an African proverb that says the axe forgets, the tree remembers. The tree will keep reminding us daily if we don’t get our act together. We need nature; nature does not need us. 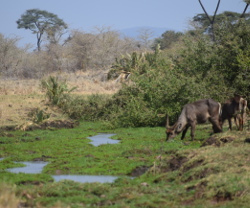