In the 200 years since William Blake wrote his famous poem, the light of the ‘burning bright’ tiger has been growing steadily dimmer

In 1794, William Blake wrote the famous lines, 'Tyger Tyger, burning bright, In the forests of the night; What immortal hand or eye, Could frame thy fearful symmetry?'

In this poem, Blake wonders about the nature of the tiger, and captures its essence as equal parts awe-inspiring and fearsome. The big cat is now an icon, revered and worshipped in cultures across the world. Legends say they harbour the spirits of ancestors or bring good luck, and they are also used in popular culture as sports mascots or to sell products like cereal and books.

Sadly, in the 200 years since Blake wrote his poem, the light of the ‘burning bright’ tiger has been growing steadily dimmer.

These big cats once roamed across eastern Eurasia, from the sparse forests of eastern Turkey to the freezing, snow-draped mountains of the Russian Far East. Today, they have lost a staggering 93% of their historical range. Only about 4,000 tigers persist in south and south east Asia, as well as fragmented pockets in China and eastern Russia. Since the 1930s, we have already lost two of the nine subspecies: the Bali and Javan tigers. The South China tiger has not been seen since the 1970s and may also now be extinct. 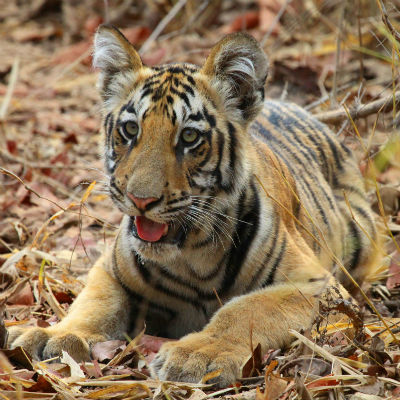 What happened to tigers, one of the most charismatic species in the world? Poaching for the illegal wildlife trade, human-tiger conflict, and habitat loss are all culprits in their steady decline. Tigers and countless other species are being pushed into ever-smaller pockets of forest, not nearly big enough for an apex predator to thrive. Roads, railways, and transmission lines now criss-cross landscapes, fragmenting precious habitat and allowing hunters to reach deeper into forests to kill tigers and their prey. In some areas, overhunting has become so severe that lack of prey is now a significant threat to the tigers’ survival. In Satpuda, central India, where Born Free’s Living with Tigers programme operates, hungry tigers are forced to hunt livestock for sustenance. This means tigers venture closer to villages, often resulting in human-wildlife conflict.

As human populations burgeon and forests continue to shrink, people and wildlife are increasingly competing for land and resources. In the face of such a challenge, how can we make space for tigers?

You may be surprised to hear that urbanisation presents us with a fragile hope. New studies show that as Asia’s people transition away from rural areas and towards cities, they leave behind space for tigers, their fragile habitat, and countless other species, giving them a chance to recover. That being said, urbanisation must also be combined with careful landscape protection in order to preserve wild spaces in the long-term; otherwise urban encroachment and sprawl could simply expand into these areas in the future.

Sadly, the effects of urbanisation may not come in time to save many tiger populations. Millions of people still live in rural areas and come into frequent contact with tigers and other wildlife.

Born Free believes that promoting human-tiger co-existence is therefore crucial for the effective conservation of these majestic cats. Living alongside large carnivores is extremely difficult and can be dangerous, but co-existence is possible if communities are engaged and empowered to pursue compassionate solutions to conflict. Our Living with Tigers programme is working to reduce incidents of conflict and safeguard both the humans and wildlife in the Satpuda landscape in India. We encourage tolerance and work to demonstrate the tangible benefits of living alongside a healthy ecosystem, one that includes tigers.

With your help, we can work to ensure the bright light of tigers will never go out.