Born Free reflects on the death of Tim, one of Amboseli’s most beloved great tuskers

With his giant stature and spectacular tusks, watching Tim stride out across the Kenyan plains was without doubt a sight to behold, and a huge draw for the many tourists who visited Amboseli National Park in the hope of seeing him.

Born in January 1969, Tim was four years old when he first came to the attention of wildlife conservation organisations operating in Amboseli. They watched as he grew and became independent, observed him as he reached maturity, and were proud to see him become one of Africa’s most famous elephants, thanks, in part, to his exceptional tusks, which weighed 160 and 134lbs.

Tim was a magnificent bull elephant. One of Kenya’s last great tuskers. But it wasn't just his tusks which set him apart from the herd. Amongst those who observed him, he was renowned for his calm and gentle nature, and was popular with other elephants of all ages. He was known to nurture friendships with younger males who were learning to be independent, and was a favourite choice of mate for females, fathering multiple calves over his lifetime.

Because he was so precious to the ecosystem as well as the local community, Tim was collared, so that he could be closely monitored and protected.

The sad news that Tim had died from natural causes reached us on 5th February. He was 51 years old. Although male elephants typically have shorter lifespans than females, Tim was in good health and his death came as a shock to conservationists on the ground, who knew and interacted with him on a regular basis.

Cynthia Moss, Director of the Amboseli Elephant Trust, said: “Tim’s passing was a loss to the whole world, because he was a rare, spectacular specimen of a male elephant with his tall stature and his huge sweeping tusks.”

The Trust added in a statement that: “We take comfort in the fact that Tim's life had significant impact for both elephants and humans: protecting him catalysed positive collaborations, his fame sparked huge public awareness and his legacy lives on in the lives of the male friends who he taught, and the calves he fathered.”

During his latest visit to Amboseli, Born Free Co-Founder and Executive President, Will Travers OBE was lucky enough to observe Tim in the park which had been his home for over 50 years. He said: “Tim was one of the most magnificent male elephants in the world. I saw him during my last visit to Kenya, on 13th of January, wild and free. He was a testament to effective conservation.”

LAST MARCH OF THE TUSKERS

Limited edition prints of Last March of the Tuskers, by renowned wildlife artist Jonathan Truss, are now available to purchase in aid of Born Free. The image shows Tim and his uncle, and is assumed to be the last painting of him before his passing. 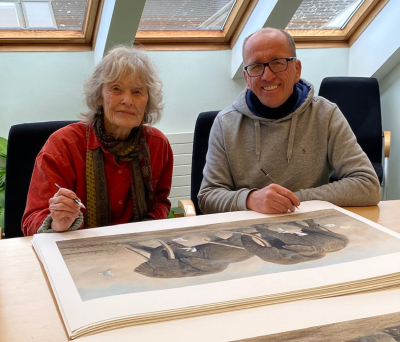