In 2001, the 172-year history of keeping elephants at London Zoo came to an end. What happened to London’s last elephants?

In 2001, the remaining elephants at London Zoo – Azizah (Lyang-Lyang), Geeta (Dilberta) and Mya – were transferred to Whipsnade Zoo. But what happened to those elephants? Their stories after London help us understand how difficult life is for captive elephants, and why Born Free is calling for the keeping of elephants in UK zoos to be phased out.

Azizah gave birth to four sons before she was euthanised due to ill health aged 34 – an age at which she would have been in the prime of life in the wild. Only two of her sons are alive today. One died, aged one, from elephant endotheliotropic herpesvirus (EEHV) and another, who had been sent to a zoo in Spain, died at 13.

Today, one of Azizah’s remaining sons lives in a zoo in Poland, whilst the other remains at Whipsnade Zoo.

Geeta was euthanised due to ill health at Whipsnade Zoo at an even younger age than Azizah, just 26 years old. Geeta did not have any calves.

This makes Mya the last living London Zoo elephant. Still relatively young at 37 years old, she has never bred. Mya lived at Whipsnade Zoo until last year when she was sent to Naples Zoo, in Italy. 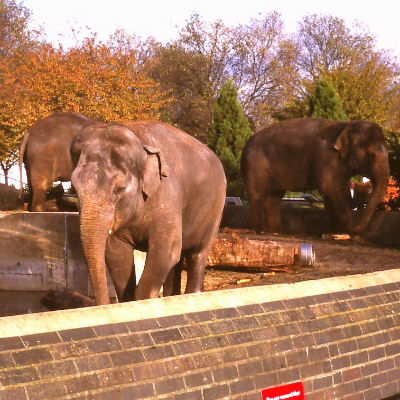 The lives of these elephants, including Azizah’s calves, all tell the same tragic story of life in zoos: reduced lifespans, illness and separation. This life continues for Mya, who after 17 years at Whipsnade Zoo, has been sent to a zoo known for a troubled past. For Mya, questions remain. Will she live out the rest of her days in Naples, or be transferred once again? Will she be left alone if Naples Zoo’s only other elephant leaves this world before she does? Mya’s quality of life and welfare remain at risk.

That’s why we’ve launched our Elephant-Free UK campaign, to call on the UK government to phase out the keeping of elephants in UK zoos. You can help by taking action.