THE COST OF ELEPHANT CONSERVATION

The matriarch shifts her gaze to watch her herd under the cool shadows of an acacia tree.
She is a grandmother and a leader, her knowledge of the vast area her family roams has been passed down from generation to generation. She will guide her family, as many have done before her, in the wild, where she belongs.

Elephants live highly complex lives, but the threats facing them are numerous and grave. There is no doubt that poaching, human-wildlife conflict and habitat loss has decimated elephant populations across the globe. But Born Free will never give up protecting
elephants. We have a duty to protect elephants in the wild, in their home and where their heritage lies.

Born Free began supporting elephant conservation in 1992, by working with Dr Cynthia Moss at the Amboseli Trust for Elephants, who directs the longest running study of African elephants, started in 1972. Most of what we know about the African elephant is due to their tireless efforts to study and protect the species in Kenya. For years, we have followed the world famous EB elephant family (each group is assigned an alphabetical code) and the insights that have been gained by studying them are invaluable to conservation. 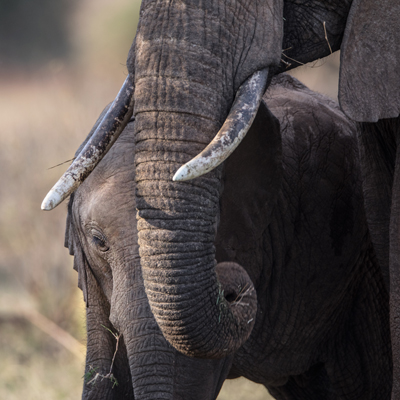 Since then, Born Free’s involvement in elephant conservation has grown and we have initiated our own projects to safeguard elephant populations across Africa. Currently, we are working in the Babile Elephant Sanctuary in Ethiopia, Banyang-Mbo Wildlife Sanctuary, Cameroon and National Park Rescue in Zimbabwe to protect critical populations of African elephants. We support ranger patrols and help strengthen law enforcement in Babile and construct fences made of chilli pepper plants to mitigate conflict between people and elephants. Since 2017 we have collaborated with the Korup Rainforest Conservation Society to establish an Elephant Guardian Programme in villages around the Korup sanctuary in Cameroon. The aim of this project is to create an environment where elephants are tolerated and humans and elephants can co-exist together, so that elephants can move unimpeded through the landscape. To tackle the poaching crisis in Zimbabwe’s Chizarira National Park we will be supporting a management policy to integrate the surrounding communities and enable the park to be sustainable long into the future.

But we knew we could do more. Born Free is now partnering with scientists on the ground in west Ghana (Bia National Park) and in northern Liberia to complete rapid surveys of the forest elephant population in these areas. Forest elephants have received far less attention than their savannah counterparts, but the decline in their populations has been devastating. It is essential these critical populations are assessed to inform future conservation actions.

But we are not only protecting elephants. Numerous species rely on the elephant as a keystone species. Elephants disperse seeds, provide rich fertiliser via their dung, dig wells and modify habitats for an enormous diversity of species to find a home in. Without elephants in the wild, habitats become degraded and species diversity plummets. For example, elephants are essential in the growth and survival of large trees, their loss in an environment can reduce carbon sequestration, aiding climate change and leading to problems for us all.

To protect elephants and the ecosystems they are part of requires funding, a significant challenge for conservationists. It is estimated that the cost of caring for an elephant in captivity can be up to £79,000 (US$100,000) per year. Currently, there are 52 elephants in zoos across the UK, meaning that approximately £4.1m (US$5.2m) may be spent annually to look after them. These elephants will never be returned to the wild and that money will not be able to make a difference to conservation.

The challenges conservationists face to protect elephants are huge. However, Born Free knows that there is no choice: it is essential that we tackle issues facing elephants in the wild, to help keep them where they belong. To do anything less than that would be a tragedy.