In addition to traditional circuses, many wild animals are used in performances in zoos, travelling shows, hotels, and other venues and events. These activities, which can seriously impact on animal welfare, have become increasingly unjustifiable, particularly in zoos, which are now largely expected to prioritise conservation and public education.

The use of animals in performance raises serious concerns for the welfare of the animals involved.

Performances may involve actions or manoeuvres that place the welfare of the animals at risk. For example, requiring a tiger to jump through a burning hoop, an elephant to stand on its head, or a monkey to ride a bicycle, is likely to result in both short and long-term animal welfare problems.

Animals in captivity are commonly bored and frustrated, often developing unnatural and repetitive, ‘stereotypic’ behaviours in order to cope with a lack of natural stimulation. Animals used in shows may have been deliberately, and prematurely, separated from their mothers and hand-reared in order to habituate them to human contact and training. Some may have teeth or claws removed in order to limit the risk of injury. 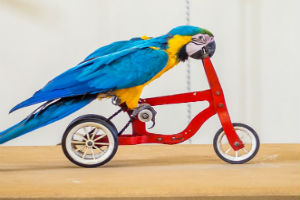 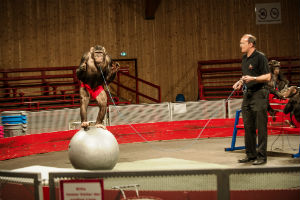 Many animal shows, presentations or public interactions are marketed as educational. Yet, these shows often involve animals performing unnatural behaviours, such as sea lions balancing balls on their noses, parrots roller-skating, elephants standing on their heads or painting pictures, or tigers jumping through hoops of fire.

Some shows may involve captive animals demonstrating seemingly ‘natural’ behaviours, such as bird of prey and parrot flight displays. However, these animals will require training in order to learn the cue to perform behaviours on demand.

Animals used in shows may be trained to perform tricks or behaviours using a ‘positive reinforcement’ technique, where the animals may receive a reward for performing the desired task, usually food. Others may undergo more abusive methods, relying on fear and domination, to make sure they learn their cue to perform in front of an audience. However, both methods usually involve repetitive actions and training regimes, which do not hold the welfare of the animals as the top priority.

Shows may sometimes provide information about the species involved, but others may be accompanied by loud music or ‘comedic’ activities. Bearing no resemblance to the species’ behaviour in the wild, these presentations cannot be classed as ‘educational’ and can seriously compromise the welfare of the individual animals involved. Some activities may lead to animals developing serious health problems, for example, joint problems might develop in elephants from unnatural weight-bearing tricks, such as standing on their heads or hind legs.

The long-term and lifelong impact of subjecting wild animals to the necessary training required to coerce them into carrying out desired behaviours should not be underestimated. 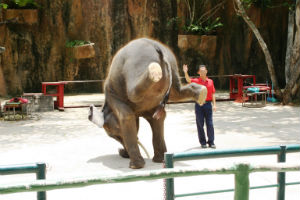 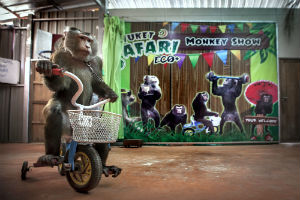 Wild animals are naturally unpredictable and potentially very dangerous to humans. Some not only pose the threat of injury to people, but the significant potential for disease transmission between animals and people (zoonotic diseases).

The often close proximity of animals to people during performances poses serious risk of accident or injury. Many shows even offer the opportunity for people to touch, pet and hold animals, often for a souvenir photograph.

Many animal trainers and keepers, as well as members of the public, have been injured or killed by animals used in performances over the years.