“Local people should be empowered to preserve the integrity of their natural heritage for their benefit and that of their children,” believes Orume Robinson, founder of Korup Rainforest Conservation Society (KRCS).

Established deep in the rainforests of south west Cameroon in 2009, the Born Free-supported KRCS empowers communities to protect the rich natural heritage of their local area. Locals are encouraged to share their traditional knowledge and expertise to promote co-existence between humans and wildlife.

“We have been able to mobilise more than 200 locals to join our movement,” Orume explains. “We have trained locals in wildlife conservation research and education skills that have provided more than 150 short to long-term jobs, made possible about 11 scholarships for less privileged kids from local communities to attend secondary to university-level education they would otherwise never have the opportunity to attend, and also supported and promoted several micro-projects in some communities to improve livelihoods.”

In 2017, Born Free and KRCS worked together to set up an Elephant Guardian Programme in villages around Banyang-Mbo Wildlife Sanctuary. The project aims to create an environment where humans and elephants can co-exist together. Local communities are encouraged to inform project staff rather than elephant poachers when they encounter elephants, so that project staff can monitor the movements of the elephants. In return, the project is assisting village primary schools so that whole communities can benefit and, where elephant crop foraging is a problem, build chili-fencing as a conflict mitigation strategy for local farmers.

Dr Liz Greengrass, Born Free’s Head of Conservation, who works on the Elephant Guardian Programme, says: “Orume has built up a reputable and well-managed organisation that has become the go-to organisation for the international community working in the region. He is a genuinely honest, compassionate and unassuming individual who passionately believes that education has a key role to play in reducing peoples’ reliance on commercial bushmeat hunting and natural resource exploitation, and the focus of KRCS on education and sponsoring scholarships for local children reflects this. He and his colleagues continue to work around the park despite the risk posed to them from ensuing civil conflict.”

Orume’s quiet persistence and unwavering determination to preserve and protect wildlife has helped him get even the most difficult of people on his side. 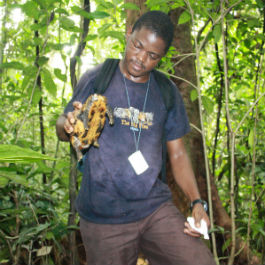 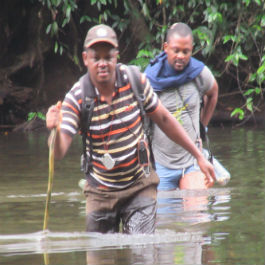 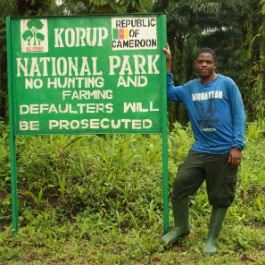