Badaling Wildlife World in Beijing, China, is in the news again following another incident where a visitor has ignored safety warnings.

It has been reported that the man opened his car window to feed the animals while driving through the safari park’s black bear enclosure. A bear managed to force the car window fully open, and bit the man’s arm.

There have been similar shocking incidents at this zoo. In July, staff had to intervene when a visitor decided he could get a better view inside the bear enclosure by standing up and putting his head and torso through his car’s sun roof. Thankfully staff were able to avoid an incident taking place. Tragically, in 2016 a woman was killed and another seriously injured by tigers at the zoo when they got out of their car inside the animals’ enclosure.

Clearly something needs to change at Badaling Wildlife World before another tragedy occurs. We are convinced that zoos and safari parks can never guarantee the safety of visitors or animals, and that safety measures commonly in place are woefully inadequate. The conditions in captive animal facilities in China are of great concern, and Born Free is working with our friends and colleagues in the region to push for genuine change that will benefit people and animals alike. 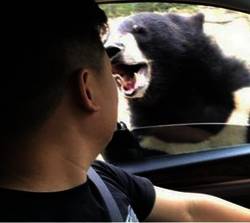