14th July marks the 16th anniversary of the day Springer, the orphaned baby orca, was released back to her home waters and her orca community.

It had been a long journey from the time she was first discovered, all alone, languishing in Puget Sound near Seattle, Washington, in January 2002. There were a lot of bumps in the road but eventually Springer - after receiving rehabilitation care and nourishment for a month in a temporary holding pen - was lifted aboard a high-speed catamaran on 13th July 2002 and transported several hundred kilometres to a small bay in Blackfish Sound, where she was placed in another temporary pen. Huge thanks goes to Born Free for their quick response in providing the funds needed to cover those transportation costs.

Springer was to spend her first and only night in that pen, chasing and eating wild salmon and joyously leaping from the water again and again! Later, in the dark of night, her family passed by. She was so excited to hear them she could barely enunciate her calls! Their intense vocal exchange set the stage for her release the next afternoon. Within three days of her release Springer was back among her own kind.

Fast forward 16 years and Springer has become a mother twice over and has never again been separated from the company and support of her orca community.  As the start of the 2018 season unfolded, Springer returned to the area of her release, bringing her two little ones, Spirit (A104) and A116 (yet to be given a name). For part of their visit, mother Springer ushered her little ones to the rubbing beaches where our remote surface and underwater cameras captured their passes over the shallow, pebbly shore. It was a heart-warming and beautiful moment.

Springer, bereft of her own mother at such an early age, is now all grown up, a caring mother of two, fulfilling her orca destiny.

Springer’s story is truly an inspiration and represents the opportunity that all orcas deserve; to live wild and free. Through Born Free you can adopt Springer and support efforts to end the keeping of whales and dolphins in tanks. 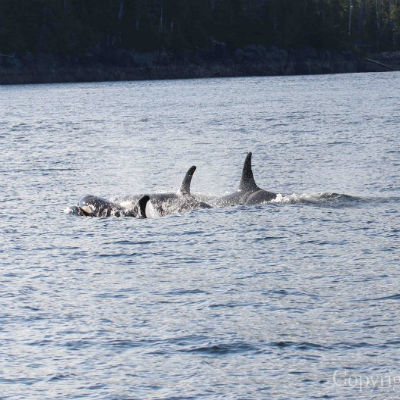