News from South Africa reports that a woman was killed on Tuesday (27th February) by a captive lion at the Dinokeng Game Reserve.

The Reserve is home to ‘The Kevin Richardson Wildlife Sanctuary’, which houses numerous lions from various, different backgrounds. The deadly incident is said to have taken place when three lions were being taken on their ‘weekly walk’ in the reserve, accompanied by Mr. Richardson and a colleague. At some point during the walk, one lioness is believed to have run off after an impala antelope, before subsequently encountering and killing the woman.

according to www.rekordeast.co.za, the woman was not a member of staff but a visitor. She was in the camp area of the Reserve and was reportedly attacked by the lion whilst taking photographs with a friend.

Will Travers, President of The Born Free Foundation, stated: “This must be a terrible shock and sadness for all concerned and our thoughts and sympathies go out to the victim’s family and friends. Staff at the facility must also be in shock. However, it highlights once again the fact that these are wild animals and that, notwithstanding the apparently close relationship that Mr Richardson has with a number of them, their behaviour and human safety cannot be taken for granted. The constant stream of ‘up close and personal’ images and footage of people with lions can lull the wider public into a sense of false security.  Born Free continues to campaign against the idea that it is acceptable for people and dangerous wild animals such as lions, tigers, jaguars, elephants and bears to be allowed to get unrealistically close to each other.”

In 2017, an 11 year old boy was mauled by a lion that had escaped from a private estate in the Limpopo Province. Tragically, it was reported that the boy later died from his horrific injuries in hospital.

The misguided desire for ‘close contact with big cats’ has even resulted in the establishment of organisations like the ‘Black Jaguar, White Tiger Foundation’ in Mexico. This highly controversial establishment constantly promotes its owner, Eduardo Serio and others, including celebrities such a Formula 1 champion Lewis Hamilton and the Kardashians, participating in close encounters of the unnatural kind with allegedly ‘rescued’ big cats.

Will Travers concluded: “Fortunately the tide is turning and recent moves by some social media platforms, including Instagram, to issue warnings about what Born Free calls #SelfishSelfies are welcome first steps. Obtaining that cute, once-in-a-lifetime image may, in fact, put your life at risk and the welfare of the animal in jeopardy. It is time to get real. Treat wild animals with the respect they deserve. Introduce laws to prohibit private exploitation of captive wild animals and promote measures to protect and conserve wildlife in the wild – where it belongs.” 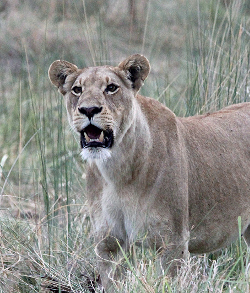